When three young Americans popped their heads around the door at the Melody Maker office in Fleet Street one morning in 1965, they were full of charm, humour and enthusiasm. Who were they? ‘We are the Walker Brothers!’

They’d just arrived in London from California and were ready to take the Swinging Sixties pop scene by storm. And they did. Within weeks they became British teenagers’ favourite singing sensations and the object of screaming adulation. Walker Brothers’ records like Make It Easy On Yourself, My Ship Is Coming In and The Sun Ain’t Gonna Shine Anymore roared, or rather melodically cruised up the MM charts.

The ‘Brothers’ were Scott Engel, John Maus and drummer Gary Leeds and they all exuded charisma – especially Scott. It would be my pleasure to follow his career and interview the good looking, witty and ultra cool singer on many occasions during the heyday of the Walkers’ success. Sitting with Scott in his usually darkened London apartment, discussing his tastes in music was to reveal a sensitive, sometimes acerbic aesthete who loved jazz and Jacques Brel more than he did rock’n’roll.

Yet in the early days, he secretly enjoyed the madness of pop stardom. I remember standing backstage with Scott at the show when Jimi Hendrix set fire to his guitar, and him smiling at all the chaos that ensued. But when I next saw him, singing with the Ronnie Scott Band at the Stockton Fiesta Club in August 1967, I believed he had every chance to move onto a higher musical plane and perhaps become a new Frank Sinatra, with a career in movies and show business.

Alas, for his well wishers, it was not to be. The various Melody Maker interviews seen here reveal the tensions he underwent and feelings of self doubt. But Scott went his own way, stuck to his artistic guns, and continued making music, even if the public at large gradually withdrew their attention. He once told me he was a recluse who didn’t have any friends. Actually, a lot of people loved him. (RIP Scott Noel Engel. Born January 9, 1943 – died March 22, 2019). 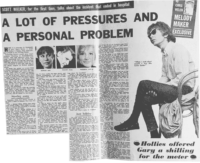 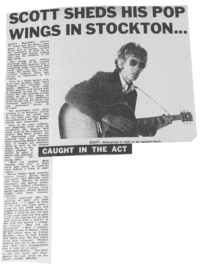 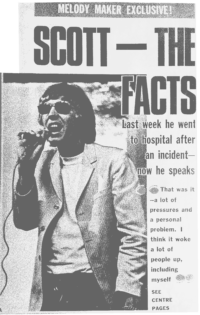