When sirens wailed a farewell All-Clear, the roar of night time bombers ceased and the blast waves of detonating V1s and V2s subsided it was time to celebrate. And that’s just what thousands of children did at street parties held throughout London and the rest of country on May 8th, 1945.

It may have been 75 years ago, but my own memories of the Second World War remain strangely clear, if only in random, selected moments of excitement, upset and confusion. What helps bring back our childhood years are the photographs, especially one that survived amidst piles of family memorabilia, only recently unearthed.

It is a wide angled shot of the Victory Street Party I attended with all the other kids and their mothers, who once lived in Hamfrith Road, Stratford E15. Study the photo and you’ll see the faces of the women look hard, tired and exhausted. The children are shy and slightly suspicious. Okay, they had survived the 1940 blitz and 1944 flying and rocket bomb attacks. But who knew what might be coming next?

Austerity, rationing, queues and power cuts. But there was peace, no more air raids. That was certainly something to wave flags about and pile up the sandwiches and cakes on the long trestle tables that miraculously appeared in our traffic free street.

That’s me, finger in face, second from the right. Probably asking the boy next to me why the man with the camera was taking so long to get his picture. When were we going to have a slice of ‘kike’? That’s the first thing my friend said to my Mum at my own birthday party. ‘Got any kike?’ My parents taught me to say ‘cake’ so we were considered posh in our street.

We had once lived in a nice house but had been bombed out twice (I was told later) and ended up in a cramped, second floor, 3 room flat, with no bathroom and a roof that leaked. A coal fire heated the kettle that provided hot water for the zinc bath. The single toilet in the spooky old building was shared by two families and a silent, bearded hermit in a dressing gown who terrified my mum – and me.

The corrugated iron Anderson shelter in the garden was considered too cold and damp, so everyone hid in the unlit coal cellar during a night raid. At least there was a warning when enemy aircraft were overhead. There was no warning when the windows blew into Mum’s face as she was doing the washing up in the kitchen. She jumped backwards to avoid the splinters, while the ceiling fell on our heads. I burst into tears but only because the plaster had covered the Farley’s Rusks awaiting to be eaten, while sitting in a high chair.

Although nobody saw the missile that caused the explosion, locals claimed it was a V1 Flying Bomb that destroyed a row of shops in Forest Lane. A few days later I was sent on an ‘erring’ (errand) to get a loaf of bread and was confronted by an empty space where the baker’s once stood.

When peace came, there were still problems, like noisy street games, gang fights on the bombsites and police coming round to confiscate ammunition, collected from an Army  firing range by my older brother, while he was evacuated. I threw some cartridges and bullets on my Dad’s garden bonfire and they exploded. At least I didn’t try the mortar bomb, which was kept safely on my bedroom mantelpiece, above a gas fire.

If you look at the Hamfrith Road residents at the VE Day party, you’ll see there is a strange absence of fathers or male teenagers. Most of them were still in the forces, working in factories, or like my Dad for the Royal Mail, or my uncle Ben in his own brass foundry. The women took charge in their absence, hence the tough looks, aprons and power shoulders. The younger women workers used to link arms and march around Maryland Point in their lunch break, determinedly forcing older people off the pavement. For fun, you understand.

There were frequent scary chimney fires, the water, gas and electricity was often cut off and neighbours cooked meals on mobile stoves in their back yards, grimly debating whether Hitler had fled to Argentina. Even so, there was still a lot of fun in Hamfrith Road, thanks to music, music, music.

That incidentally, was the title of Teresa Brewer’s Number One hit that I used to whistle and sing loudly a few years later. In 1945 the big hits on the family HMV clockwork gramophone were ‘Barnacle Bill The Sailor’ by Billy Cotton & His Band and ‘Tiger Rag’ by George Formby and his ukulele. So, it was George who turned me onto jazz and ‘Swing it George’-  was an early example of jive talk.

BBC radio relayed pleasant songs like ‘Sentimental Journey’ by Doris Day and Les Brown’s band of Renown, ‘Rum & Coca Cola’ by the Andrews Sisters and my favourite ‘Sunny Side Of The Street’. Years later, when I could afford to buy shiny shellac 78 rpm records with money from a paper round,  I realised that 1945 had also been a wondrous year for great jazz records. 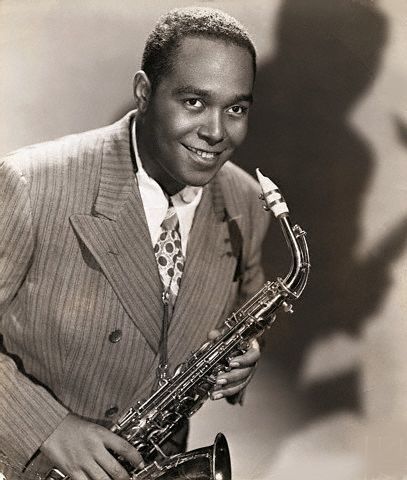 On experiencing Charlie Parker for the first time, I only heard the sound of a bluesy alto saxophone wailing from an old wireless speaker wired to a simple turntable. I had no idea who Parker was or where he came from. But if he was called Charlie he probably talked like my favourite radio comic, Cheerful Charlie Chester. And he must have come from Stratford, like me.