Wicked Games at the Pizza Express

It was a sunny Sunday afternoon when Ana Gracey descended the steps down to the Pizza Express Jazz Club Soho, ready to sing her heart out. She was greeted by an audience of fans and friends all eager to hear the original songs she unveiled on her critically acclaimed album Wicked Games and many more.

Ana didn’t disappoint as she mounted the stage and got right down to business. ‘Why don’t you walk right out the door, why don’t you like me..?’ She sang with a calm authority that belied any momentary back stage nerves before being thrust into the spotlight at an important showcase gig.

Ana was fortunate in being accompanied by a trio of superb musicians who knew her as friends and colleagues and were ready to contribute their all to the performances, including Peter Lemer (piano), Phil Mulford (double bass and bass guitar) and Billy Thompson her virtuoso violinist.

Together they embraced the powerful message of ‘Grace Kelly’ that unique hit song performed by Mika back in 2007 and now given Ana’s more restrained approach that enhanced the heartfelt lyrics.

“Thank you all for coming down to this subterranean dungeon this afternoon,” smiled Ana. She later revealed she had been doing ‘a line of Strepsils back stage.’ But they clearly worked as she slid into the Prince song ‘Cream’ another item from her 2019 Wicked Games album given a sensuous jazz treatment. 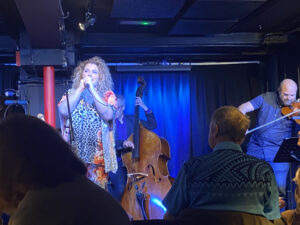 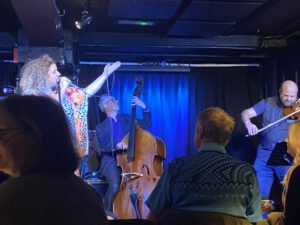 Phil Mulford set the pace with a sultry bass introduction that evolved into a duet and included him keeping time by slapping the body of the double bass while Peter Lemer offered cascading key notes.

Following Colosseum’s ‘Safe As Houses’ and some remarkable bowing from Billy came new song ‘Helluva Day’ cowritten by Ana and saxophonist Luiza Lale. Its staccato riff sustained by bass and piano lines was stunning in its hypnotic effectiveness. ‘The Rules Do Not Apply To Me’ Ana explained was about her days at Sutton High School for Girls and saw the unruly violinist break with orthodoxy as he experimented with his special FX box. 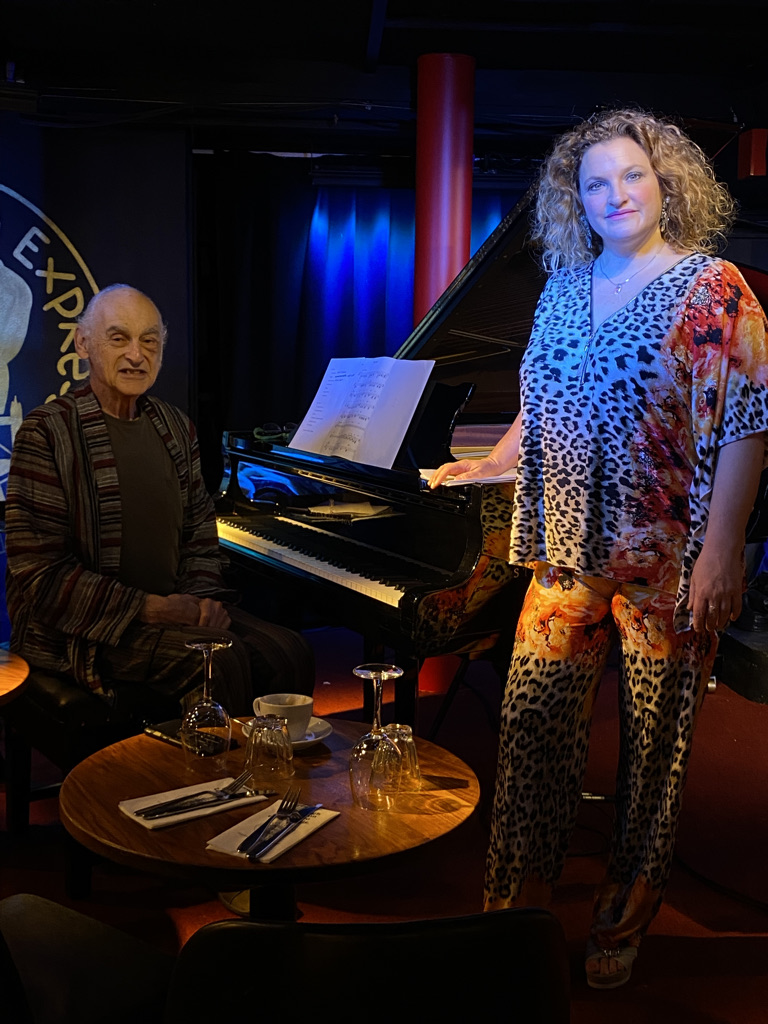 Sam Smith’s ‘Stay With Me’ was launched by Peter ushering in the melody while the bass and violin melded into the best example of small group interplay since the MJQ. The romantic ‘A Thousand Years’ in waltz time ‘Made me think of my Dad as he was drumming on the record’. Following her memories of Jon Hiseman came ‘Little Annie-ooh’ composed by Barbara Thompson MBE for her then four year old daughter.  Barbara often played the sweet’n’cheeky tune on her tenor saxophone on gigs and tours. Ana sat out this instrumental piece allowing the trio to take off with Billy fiddling once more with passionate improvisation.

Later came a gentle ‘Theme For An Imaginary Western’ the tune Pete Brown and Jack Bruce wrote together for Jack’s ‘Songs for a Tailor’ album and became an arrangement adopted  by Colosseum. Ana sang it with Mr Lemer’s piano providing all the backing required. ‘Watch Me Now’ penned by ‘a team of Lady writers’ proved an amusing clapping song with a funky bass solo to finish.

‘In Memory’ also written by Barbara and an amazing original song ‘Born To Glitter’ followed. Ana explained it was a song that put her in mind of her grandfather Philip Hiseman who was an excellent amateur magician and performed tricks for her as a child: ‘A little bit of magic lives in my bloodline’. It brought an emotionally charged performance to an end as Peter and Ana hugged each other by the grand piano amidst a standing ovation. There had been a lot of magic in the air. CHRIS WELCH