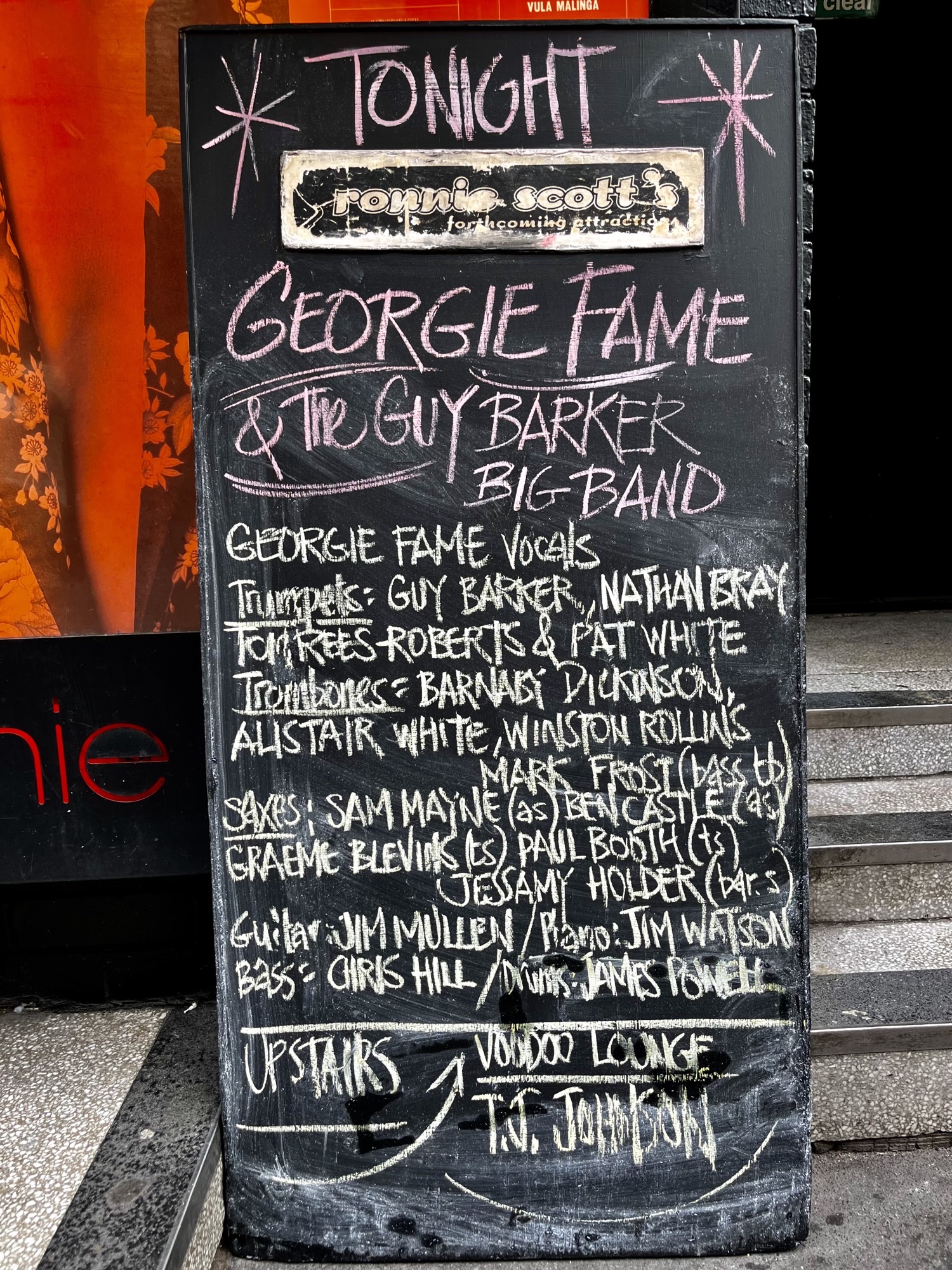 ‘I Can’t Stop Loving You!’ proclaimed Georgie Fame as the Guy Barker Big Band roared encouragement during their debut number on the hallowed stage at London’s Ronnie Scott’s Club. The audience couldn’t stop lovin’ Mr. Fame and his band of musical brothers either, during the first night of a long awaited week’s residency

It was an emotional occasion. Georgie was making a welcome return to live performance following an accident at home when he fell off a step and incurred serious injuries. He explained “I busted my pelvis three years ago and now I can’t bend over without falling over. And I can’t f***ing stand up!”

He said it with a smile. But he performed seated throughout the show and was unable to play his beloved Hammond organ due to a hand problem. The lack of space also meant it wasn’t practical to squeeze in a bulky B3 on stage. Nevertheless he sang with power and passion as he journeyed through a marvellous evening of hit songs, blues and jazz favourites.

Hailed as ‘A Living Legend’ by the club’s enthusiastic M.C. Paul Pace, Georgie took his place in front of James Powell’s drum kit and assumed his role as director and star of the show. But it was a blast from the big band’s brass section that (almost) shattered wine glasses at 50 paces as they kicked off the opening set with the Ray Charles 1962 Number One.

Fame engaged with his audience in a pleasing, conversational style that has become his trademark in recent years. “There’s been a lot of water under the bridge and I’ve been in a bit of a mess, but not as much as the country. We’ll start with an arrangement by the late Tubby Hayes”. This turned out to be ‘Yeh Yeh’ the lively tune with lyrics by Jon Hendricks that gave Fame his first Number One Hit and a Melody Maker front page when he knocked the Beatles off the top of the MM chart back in 1964.

The band swung behind a cool tenor sax solo by Graeme Blevins that matched the iconic one played by Peter Coe with the original Blues Flames (and was mysteriously edited out of the U.S. single version). It was great to hear Georgie hit that exultant ‘Yeh Yeah!’ high note one more time while James Powell’s drum breaks and fills, essential to the dynamics of the arrangement were all delivered with perfection.

Between each number Fame told entertaining stories about the origins of the tunes with anecdotes and jokes. He recalled his association with pianist and composer Harry South with ‘Blues At The Bull’ and a night at the Bulls Head, Barnes the jazz venue when he first saw Harry play in a quartet with Dick Morrissey, Phil Seaman and Phil Bates.

Harry would later provide the arrangements for their Sound Venture big band album that included Jon Hendrick’s ‘Three Blind Mice’ and James Brown’s ‘Papa’s Got A Brand New Bag’ a track that Georgie wryly recalled gained the most radio plays when the album was released in 1966.

It also featured a Neal Hefti composition, the majestically paced ‘Lil Darlin’ that he sang again live at Ronnie’s with due reverence, his accompanying musicians carefully tip toeing through the theme, the brass section at their warmest and most restrained. The big band led by trumpeter Guy Barker was a consistent powerhouse throughout the evening and provided a perfect foil for the kind of jazz Georgie Fame has embraced throughout his career.

Everyone swung out on a Basie style mid-tempo ‘Sometimes I’m Happy’ and Jim Mullen’s outstanding guitar solo on ‘I Put A Spell On You’ was greeted with deserved applause. Then it was ‘Surprise, surprise’ as our Cilla used to say. Suddenly appearing at the side of the stage was Georgie’s old mate Zoot Money of Big Roll Band fame and fellow habitué of the 1960s Flamingo Club. Georgie explained he’d exhorted Mr. Money to join him for a couple of numbers with a plaintive: ‘I can’t do it without you!’

There was some debate about whether they’d remember the words to a particular soul hit. But when Zoot joined Georgie on ‘Papa’s Got A Brand New Bag’ they could thank James Brown for the inspiration (‘Never knew the words – we still don’t!’) and a fiery tenor sax battle gave us a flavour of the All-Niter at the Flamingo in its Soho heyday. The first set ended with ‘Let The Good Times Roll’ with Zoot and Georgie enjoying themselves in a rare duet.

In the second set came ‘Vinyl’ a song celebrating Georgie’s passion for collecting classic LPs often with the help of Paul Pace. He recalled the days when Paul assisted at Ray’s Jazz, the record dealer that once graced Shaftesbury Avenue before moving to Foyles in Charing Cross Road. Ben Castle received an ovation for his wild alto sax solo as ‘Vinyl’ threatened to spin at 45 rather than 33 r.p.m. ‘The Ballad Of Bonnie & Clyde’ launched the second set along with ‘Will Carling’ a ballad and ‘The Singer’ dedicated to Madeline Bell and another tune dedicated to Richard ‘Groove’ Holmes.

“I hope it hasn’t been too painful for you and thank you for your continued support for Ronnie Scott’s and for this great big band, “said Georgie signing off with a catlike ‘I’ve Got The Blues’ with a truly amazing trombone solo from Alistair White. Georgie’s post horn gallop style finale said it all. ‘A hunting we shall go!’ CHRIS WELCH