“Hello London!” Peter Frampton was clearly thrilled to be on stage at the Royal Albert Hall after his delayed Farewell Tour came alive once more and played to packed houses. 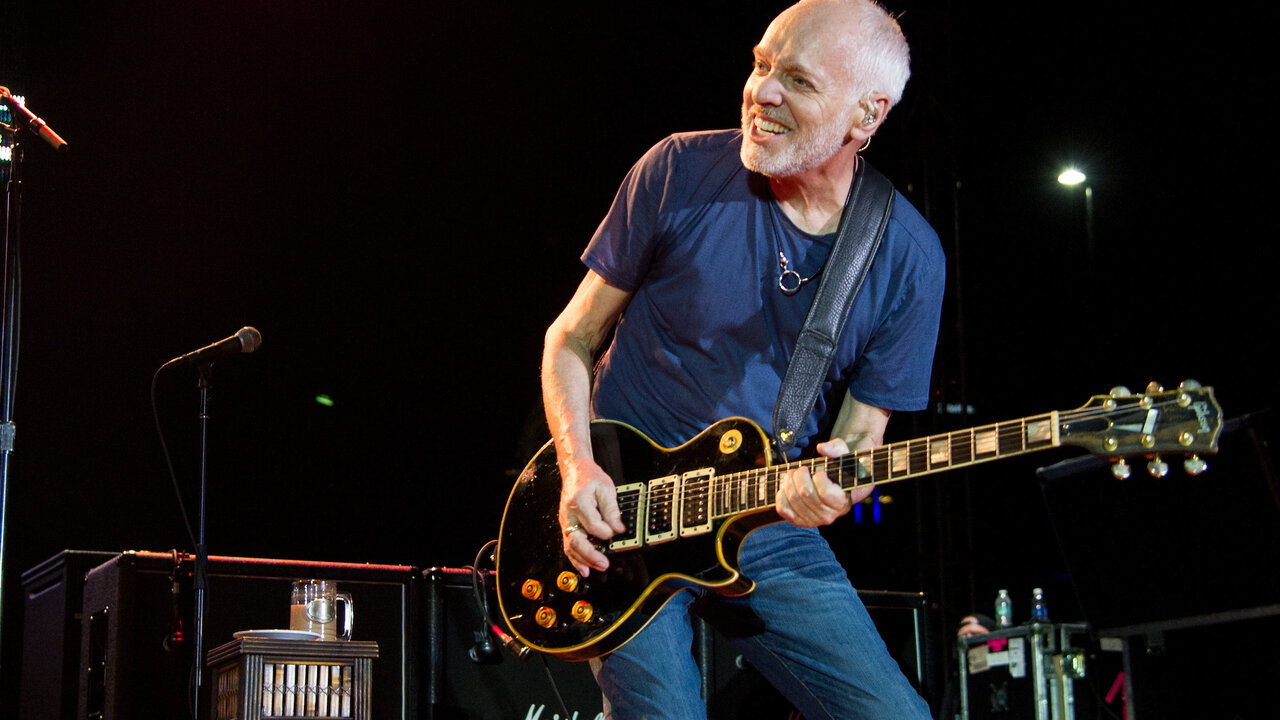 Peter’s dedicated fans were also thrilled to see him reviving the spirit of the days when Frampton’s smash hits ‘Show Me The Way’, ‘Baby I Love Your Way’ and ‘Do You Feel Like We Do’ topped charts around the world.

Would he still have the magic that made Frampton Comes Alive! his break through live album such a sensation back in 1976? The answer was an emphatic ‘yes.’ A series of heart warming performances during a song packed show lit up his abilities as a superb guitarist, singer, composer and master of the art of engaging with an audience.

Peter was also blessed with a fine band of musicians who developed a surprising level of power and drive that suited his move into a kind of hard rock groove often more Soundgarden than Camel or even Humble Pie.

The lead guitar ‘conversations’ (we won’t say ‘battles’) with Adam Lester were highlights of the evening while drummer Dan Wojciechowski kept alive the spirit of the late John Siomos who had supported Peter in the Seventies.  Dan even played Siomos’ original green drum kit.

With keyboard player Rob Arthur and John Rogan (bass guitar), the whole band not only supported the Face of 2022 but showed their own metal mettle with commanding musical authority.

Of course there were concerns about Peter’s ability to sustain the energy required for such an important gig. It was in February 2019 that Peter revealed he had been diagnosed with the muscle disorder myositis (IBM) and as a result announced a Farewell Tour that commenced in the U.S. in June that year.

Sadly the UK and European leg of the tour had to be cancelled due to the onset of Covid19. It was a relief when the tour resumed in 2022 and he was able to welcome support group Cardinal Black, a blues band from Cardiff who went down a storm with their opening set at the RAH.

Then came Peter who had to be helped on stage and remained seated throughout his London show. But he was clearly enjoying himself and laughed along with the audience when he said his last gig at the RAH had been ‘In 1902’ and recalled the days with his earlier band Frampton’s Camel ‘When I had a camel.”

The current band could be called Frampton’s Lions, judging by the way they launched into ‘Baby (Somethin’s Happening’), followed by ‘Lying’ and ‘Lines On My Face’ complete with a cutting edge solo on Peter’s favourite black Les Paul Custom guitar. When he unleashed the still eerie and captivating sound of the famous Voice Box on ‘Show Me The Way’ it brought cheers and even tears from many of his most avid supporters.

Peter told a funny story about the origin of his next song ‘The Lodger’ while ‘It’s A Plain Shame’ stormed into heavy rock mode with powerful drumming from Dan the Man. In contrast Peter played the blues on Hoagy Carmichael’s ‘Georgia (On My Mind), with such passion it would surely have impressed Eric, Jeff and Jimmy had they been sipping mineral water in one of the RAH’s private boxes.

Soundgarden’s haunting 1994 song ‘Black Hole Sun’ proved a welcome addition to the set and between numbers Peter told more stories about the origin of such tunes as ‘Show Me The Way’. Apparently he’d spent a morning having lunch and swimming between writing the lyrics to an acoustic guitar. “Not a bad start to the day”.

Of course he paid tribute to old friend Steve Marriott and their days together in Humble Pie, with ‘Four Day Creep’ and ‘I Don’t Need No Doctor’ and gave a final bow to George Harrison with a moving ‘My Guitar Gently Weeps.’ There wasn’t so much weeping as cheering with, many of his greatest fans singing along word perfect to his cavalcade of hits. It was a perfect night for Peter Frampton who deserved the acclaim for a life time of living music. CHRIS WELCH