Ronnie Scott once hailed Phil Seamen as ‘Britain’s Greatest Jazz Drummer’ a man who achieved cult status during his lifetime and inspired generations of jazz and rock musicians including Charlie Watts of the Rolling Stones and Ginger Baker of Cream.

Phil is also described as a Percussion genius and a Legendary Rebel and Born Raver in a remarkable new book written and published by author Peter Dawn. Hailing from Phil’s hometown of Burton on Trent, Peter has spent over a decade researching the drummer’s incredible life story, interviewing dozens of friends, fans and fellow musicians.

The result is a 752 page biography packed with memories and anecdotes, all accompanied by a fascinating history of the thriving British jazz and popular music scene during the post-War years. With meticulous attention to detail the book is illustrated with historic photographs, catalogues a selection of Phil’s recordings and even shows the drum exercises he used to teach pupils that included Ginger Baker.

‘Phil was my idol’ 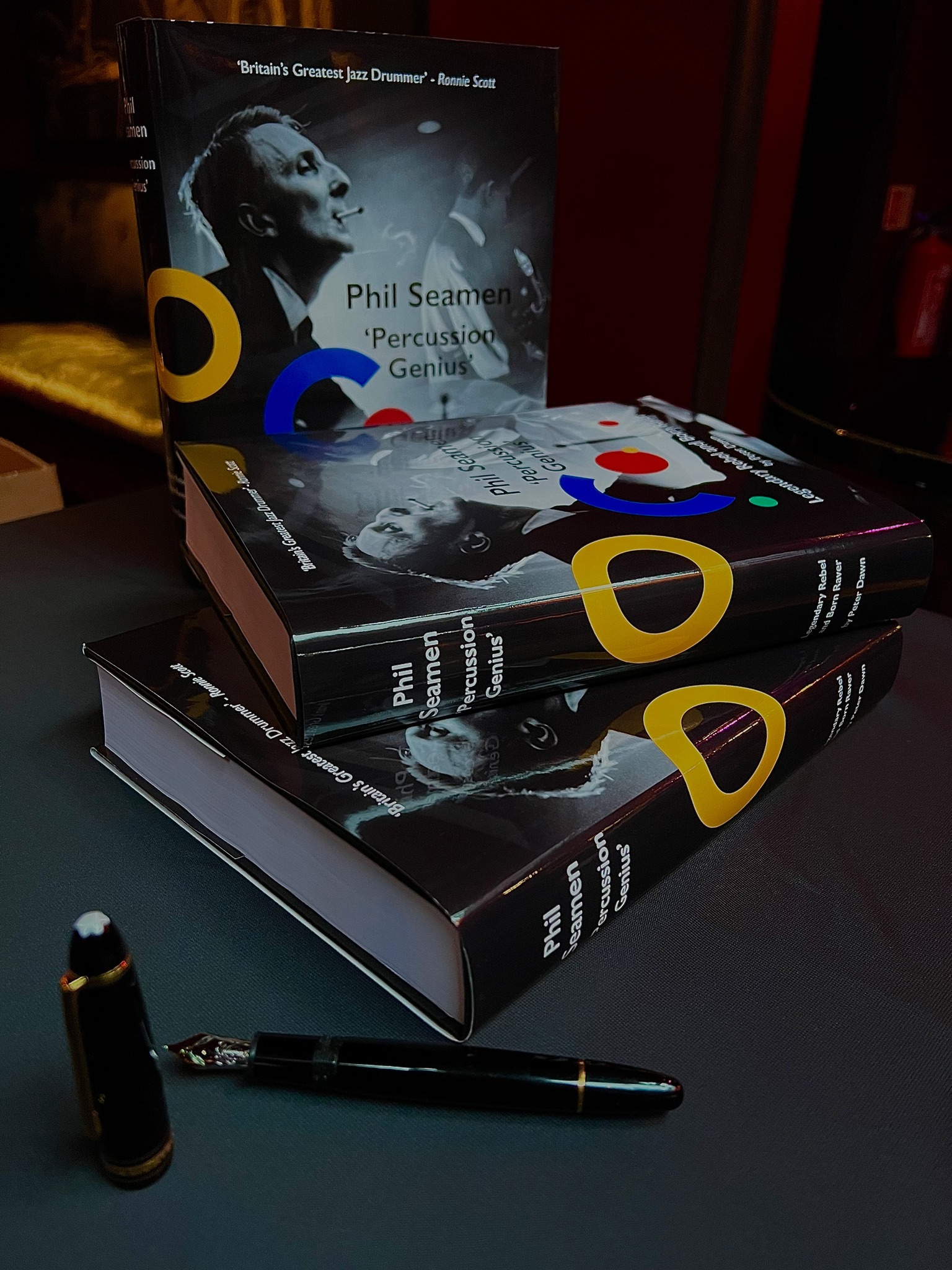 Phil Seamen is a gripping and ultimately tragic tale of the man who gave his life to playing his beloved drums. In a heartfelt Foreword the late Charlie Watts writes: ‘Phil was my idol, and he influenced a whole new generation of drummers. There is a legacy of players who emanate from Phil. He was the best drummer we’ve ever had. Totally unique and what a life he led.”

Seamen had a strong personality and biting sense of humour that grew from his working class roots and hard won experience as a star performer on stage and much in demand studio session man. He played with everyone from Ronnie Scott, Tubby Hayes and Jack Parnell, to Sonny Rollins, Stan Getz and Roland Kirk.

His drumming skills, style and innate passion for performance made him first choice to back visiting American jazzmen. Composer Leonard Bernstein especially requested him to play for the British stage production of West Side Story. When Phil’s childhood hero Gene Krupa sent a message of praise for his drumming in the show, Phil shed tears of emotion.

Why did Peter Dawn, a former businessman devote so much time and energy to write his first ever book about a man he admits he never met? Peter: “It has taken almost twenty years since I commenced my research into writing Phil’s story, and what a story!”

He began to develop the book as a retirement project in 2005 and started by collating as many of Seamen’s recordings as possible. In 2011 Peter began recording a total of well over 200 interviews with all those who knew, or had worked with the drummer. “It was like a jigsaw puzzle putting the pieces together, with one person leading to another.

“Although I didn’t realise it at the time, I was fortunate that some of the early people Phil had played with, were still alive. While the ‘scent was hot’ I carried on interviewing rather than break off to transcribe them. I discovered the British Library’s Oral History of British Jazz series of interviews that contained recollections of many more people he had played with who had passed away.”

As well as Charlie Watts another contemporary who spoke often of Seamen’s influence was Peter ‘Ginger’ Baker who was under his tutelage in the early 1960s and would recruit him for his post-Cream band Air Force. Ginger told Peter Dawn: “When Phil played me his African records it opened up a whole new world and changed my playing overnight. It saved me twenty years in three months.”

Phil Seamen was born in 1926 and became an early disciple of jazz drummers such as Gene Krupa and took up drumming on anything that came to hand from the age of six, although it was some time before he could acquire and learn to play a proper drum kit. He astounded his school friends with his growing skill and it wasn’t long before he began playing with bands.

Turning professional at the age of 19, Seamen’s brilliance was evident while playing with Nat Gonella’s Georgians, the Joe Loss Orchestra and then with Jack Parnell’s band when Jack and Phil’s drum duets became show stoppers

On discovering the latest trend of Bebop and the music of Charlie Parker and Dizzy Gillespie, Phil developed a heroin addiction shared with many other British modern jazz musicians. His drug use would ultimately damage his health and career. Nevertheless he toured endlessly playing in bands with Ronnie Scott, Tubby Hayes, Stan Tracey, Joe Harriott and Dick Morrissey. He also worked on countless studio sessions and broadcasts and made records under his own name including his 1968 album Now…Live! (Verve) with pianist Tony Lee. He also played on Georgie Fame’s 1966 UK Top 10 big band album Sound Venture.

Phil’s hectic life style, his romantic marriage and tragic divorce and many dramatic and often comic escapades are all recounted in the book. And we hear the full story behind the legendary ‘Dinner is served’ moment that occurred one night on stage during ‘West Side Story’.

‘Kick Off’ is the title of one of Phil’s 1954 recordings with Jack Parnell’s Big Band. It’s also an appropriate way to describe the events organised by Peter Dawn to launch his mammoth book on the world. Not least because the author also happens to be a former football referee.

He kicked off ‘Phil Seamen Percussion Genius’ with his long cherished dream of hosting a reception at Ronnie Scott’s Club in Soho, on Wednesday October 12th 2022, a day short of the Fiftieth Anniversary of Phil’s death on 13th October 1972.

Music critics, musicians and fans joined together Upstairs at Ronnie’s where the club’s MC Paul Pace introduced talks by myself (as the book’s editor) and, Peter’s charming daughter Lucy Freeman, who cheerfully described what life was like living with an obsessive author for a dad. Peter himself read choice extracts from the mighty manuscript.

While copies of the book went on sale and were quickly snapped up, the VIP guests swapped their own stories at the bar and raised a glass to the memory of Phil. Among them was Michael Baird, who had produced the 2009 CD compilation The Late Great Phil Seamen with liner notes that had encouraged Peter to further explore Phil’s history. A Zambian born drummer himself, Michael drove to England from his home in Holland to attend the reception and even played a drum solo in the African style that had captivated Phil. Other distinguished attendees included Richard Williams, former Melody Maker editor and Guardian music critic alongside celebrated musicians Mo Foster, John Altman, Geoff Nicholls, Richard Pite and Digby Fairweather.

A few days later, on Saturday October 15th a second even more atmospheric book launch was held, this time at Sharpe’s Pottery Museum in Swadlincote, Derbyshire. Under the huge brick tower of a surviving pottery kiln, family, friends, musicians and local dignitaries gathered once more to celebrate the life and times of Phil. A highlight came when members of the Burton Big Band played some swinging jazz and even kindly let me sit in on drums. Lucy Freeman and myself gave more talks introduced by David Agnew, whose agency We Are Ghost designed the eye catching book cover.

Michael Baird played another powerful drum solo and explained how the basis of the African rhythms worked. The next day Michael drove Peter Dawn and myself around the streets of Burton, to visit the locations where Phil Seamen was born (28 August, 1926) grew up and worked.

They included Marston’s Brewer, a pleasant park, canal and the terraced house in Outwoods Street that his parents Joe and Flo bought in 1938 and became the Seamen’s final family home.

It was also where the 14 year old Phil set up his drum kit in the front room and did his daily practise. Reminiscing in October 1972 on an album called The Phil Seamen Story (Decibel) he said: “I’d have the front window open and wait until someone was coming down the street and put on my favourite record which could be Benny Goodman’s ‘Sing, Sing, Sing’…and give them full blast.”

Sadly he never completed recording his spoken memoir as he died in his sleep shortly afterwards, on 13 October, 1972 aged 46. It would be fifty years before Peter Dawn completed the full Phil Seamen Story.

Digby Fairweather, trumpeter and founder of the Jazz Centre Society says: “On my way home from the Ronnie Scott’s Club launch I had a chance to dip into the book to emerge from the dip with nothing less than a sense of wonder. It’s a fascinating and often moving step back in time and this marvellous book dwarfs any other biography ever written about a British jazz musician’.

To purchase a copy of ‘Phil Seamen: Percussion Genius’ go to