STEVE EGGS BAND LIVE Turning Up At the Oval

It’s hard to believe a year has passed since we last saw the Steve Eggs Band performing at the Oval Tavern, one of the best live rock music venues in Croydon. But they came back on September 16th, 2022 boiling with energy amidst a bubbling cauldron of creativity.

It was in October 2021 that the band celebrated the release of its new album Lazarus Lights that included such songs as ‘One Horse Town’ and ‘Slippin’ Away.’ It was also a time when Croydon music lovers were free to celebrate the conclusion of the contagion of Covid. And so the populace was free to enjoy the sound of ‘Crash Landing’ and ‘It Won’t Rain Forever.’

Wind forward to September 16th 2022 and it turned out it hadn’t rained – at all! At least, not during the many weeks of summer drought and forest fires. Now the Eggmen, who escaped being fried during the Great Heatwave were ready to regale fans with yet more new material including a track that deserves to be a hit single. More about that later.

NOT A DRY ICE IN THE HOUSE

Come 9 p.m. the band leapt on stage amidst a blaze of laser beams and clouds of dry ice. Or they would have done if Steve, lead singer, guitarist and composer in residence had his way. However, his plan for an O2 style light show had been stymied at a heated band meeting earlier that week. (At least, that’s what we imagine happened).

Instead Mark Taylor’s amber coloured Gretsch drum kit glowed while the glossy guitars were strung up and ready for action bathed in subdued lighting.

The first number was ‘Falling Into You’ a song from their 2014 album Hometown Skyline with Jon Kershaw taking a meteoric solo on his classy Translucent Blue PRS SE Standard 24 guitar. (See, we have the facts).

‘Good Intentions’ followed, a tune Steve explained was “Recorded a few years ago on our first album when we were a lot younger. Peter Wass our bass guitarist was then just 16.”

A Status Quo style guitar battle ensued twixt Steve and Jon before Mark’s drums kicked in ‘A Whole Lotta Nothing’ from Lazarus Lights and its pard’ner ‘One Horse Town’. ‘Ghost Train’ built to a haunting climax before Pete sang his own song ‘Here Comes The Rain’ that he assured us was ‘Not available in any shops’. Even so Jon’s chiming guitar made it a ‘must buy.’

When Steve prepared to float into the epic ballad ‘Wrap My Arms Round You’ he forewarned us: ‘There will be a beautiful moment when bubbles come out of the ceiling.’ Sadly this too had been vetoed. Nevertheless Mr. Kershaw produced some stunning tonal FX instead with more on ‘When The Darkness Comes’. 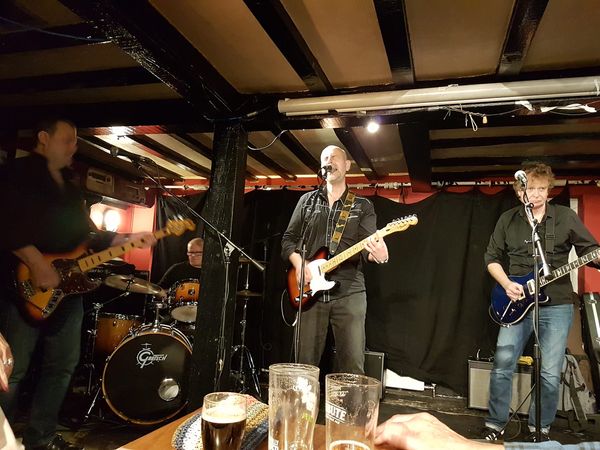 The first set ended on a high with the rockin’ ‘It’s Alright’ then after a pause for refreshments, came ‘Wah Wah Banjo’ AND that new potential hit track mentioned earlier. It has a funky beat set up by Mark and Pete, before the tune moves into heavy rock mode with joint vocals from Peter, Jon and Steve, delivering the catchy hook line.

Assuring any Oval-teenies in the audience this was the group’s hot new number Steve explained: “It’s called Turn It Up…or Turn It Down or leave it as it is.”

Now it was time for the real Joke of the Week. Jonny The K. stepped centre stage to tell us about a bloke receiving mysterious gifts of flowers, with all the heads cut off. “He thinks he’s being stalked!’

As the laughter echoed around the pub, it was revealed that Mr. Wass would sing ‘Highway 61’ as a tribute to his personal idol, Mr. Bob Dylan. Steve advised ladies in the audience to form an orderly queue to see Pete in action, although there was a problem. “It’s now four and a half miles long.”.

After a moving ‘We Humans’ the show evolved into a rock’n’roll medley featuring Tom Petty’s ‘American Girl’ and Jon’s extended solo on a raving ‘Roll Over’. These presaged ‘Folsom Prison Blues’ with increasingly frantic country geetar. Eat your can of beans out Albert Lee we are tempted to say. But it was ‘The Apartment Song’ from Tom Petty’s Full Moon Fever album that provided the final foot stomping climax to another great evening at the Oval. Don’t turn it off. Turn it up and go see them. CHRIS WELCH