When the Benny Goodman Orchestra and guests presented their legendary concert at Carnegie Hall, New York City on January 16th, 1938, it was a ground breaking event that established jazz as a serious musical form and also wowed a lot of Lindy hopping swing fans.

When clarinettist Pete Long presented his band’s concert at Cadogan Hall on January 26th 2020 it was another historic day when today’s swingers leapt to their feet and danced in the aisles. At least they swayed and clapped to the beat, as there aren’t enough aisles in London’s cosy answer to Carnegie Hall.

The Jazz Repertory Company presented the show, intended as an authentic recreation of the big band and small group music played by the cream of jazz musicians at the birth of the Swing Era. A challenging task? To those who still cherish their copies of The Famous 1938 Carnegie Hall Jazz Concert belatedly released in 1950 (the first million selling double ‘live’ jazz LP), there was a sense of nervous anticipation when the musicians strode on stage in full evening dress and took up battle stations behind their music stands.

Except this was no battle of the bands. Here was a joyous celebration of the exciting, jubilant music that gave so much pleasure to generations of fans and inspired many to themselves become jazz musicians. There was no need to panic! From the opening bars of Don’t Be That Way the audience could rest assured that here was a band Benny Goodman himself would have been proud to conduct. 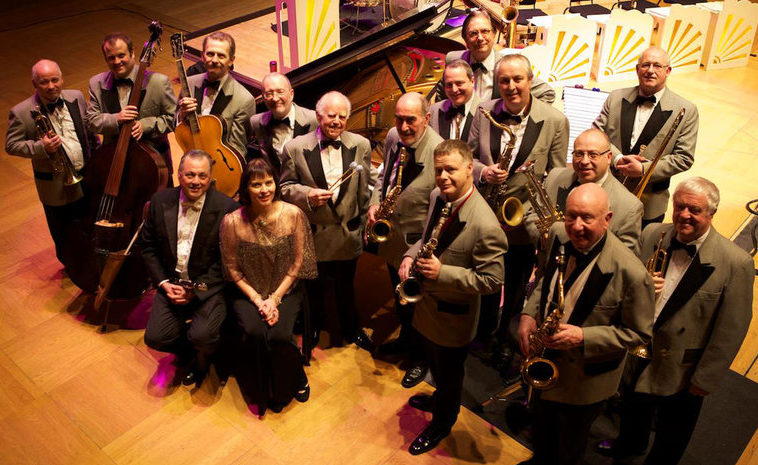 We should explain that in 1938 Goodman was hailed as ‘The King Of Swing’ and critically acclaimed as a virtuoso clarinettist. His band was blessed with dazzling soloists notably Harry James and Ziggy Elman (trumpets), Lionel Hampton (vibraphone) and Gene Krupa (drums). Pete Long & His Good Men (as they were billed) leapt into the fray with all the energy, enthusiasm and panache of those swing era pioneers.

They not only had the technique to match the original musicians, they understood the style and achieved the distinctive sound of the B.G. band with its shouting brass, mellow reeds and stomping rhythm section. Pete Long, our witty and informative host for the afternoon was the musical director in charge of this bold venture and also had the honour of playing all the Goodman clarinet parts, which he did with his own fast and furious style. The programme included most of the key numbers from both volumes of the Carnegie Hall LP but wisely eschewed Honeysuckle Rose that had Count Basie on piano backing Lester Young, Johnny Hodges, Harry James and Buck Clayton on an over long Jam Session that failed to spark.

Our show kicked off at 3 p.m. when Mr. Long counted in the cheery Edgar Sampson tune Don’t Be That Way met with the same ripple of applause that politely greeted Mr. Goodman all those years ago. But within a few bars the Good Men showed their mettle, playing at a marginally faster pace than B.G. while adhering to the dynamics so important to the Sampson arrangement. In other words, after bouncing through the infectious theme, they grew quieter and quieter…until BLAST! No, not an oath from a saxophonist dropping his sheet music but the violent snare drum fusillade from Richard Pite, today’s inheritor of Krupa’s crown.

Gene’s explosion that interrupted the original Don’t Be That Way broke up the tension at Carnegie Hall, delighted the audience and brought the hesitant B.G. Orchestra to life. Our Drummin’ Man Pite achieved exactly the same results at Cadogan Hall with his spot-on reproduction of that exhilarating moment. He also played press rolls on the snare drum rather than ride cymbals, hit cowbells and small crash cymbals with ease and pounded four beats to the bar on a bass drum, all part of his lovingly reproduced 1930s Krupa kit.

In the midst of all this, solo honours went to Andy Flaxman and Duncan Hemstock (trombones) and James Davison (trumpet). Then came a mellow Sometimes I’m Happy, a melodic two-beat dance number with muted brass, interspersed with hot trumpet from the wondrous Enrico Tomasso.

The Basie anthem One O’Clock Jump epitomises the art of layering hypnotic section riffs that build towards to a satisfying climax. Pianist Colin Good, tasked with following in the footsteps of Basie, Teddy Wilson and Jess Stacy throughout the show, kicked off Jump backed by the world’s greatest rhythm section (in Sloane Square) comprising Joe Pettitt (bass), Martin Wheatley (guitar) and that gum chewing crazy guy on drums.

The clarinet solo was played by P.L. with wilder emotion than B.G. and the shouting finale was topped by Nathan Bray’s soaring trumpet.

A Twenty Years of Jazz musical documentary popped into the 1938 programme was always a bit of a misfit. Nevertheless it benefited from fine playing by Bobby Hackett as Bix Beiderbecke on I’m Coming Virginia, Harry James as Louis Armstrong on Shine and Johnny Hodges as himself on soprano sax for Ellington’s Blue Reverie. The G Men too distinguished themselves in their adopted solo roles.

The full orchestra returned for a stunning Life Goes To A Party, a rave up credited to Goodman and Harry James and given new life by these English (and Australian) gentlemen of swing. Next Richard Pite joined Colin and Joe on a smaller set of drums to play in the B.G. trio format on a moving Body And Soul. Anthony Kerr arrived on vibraphone for the quartet session featuring Avalon, The Man I Love and I Got Rhythm, when he utilised four mallets a lá Lionel Hampton with great precision.

Big John Special concluded the first half and after a scramble to locate the bar and loos, it was back for a boisterous Blue Skies, an Irving Berlin classic Goodmanised with a Fletcher Henderson arrangement. Pete Long recalled how its raucous trumpet fanfare shocked Benny at their first rehearsal. Fletcher explained that blue skies are invariably preceded by a thunderstorm.

Louise Cookman made a welcome appearance in a sultry dress to sing Loch Lomond and Bei Mir Bist Du Schoen with sexy aplomb, the latter number enlivened by the inclusion of a ‘frahlich’ trumpet solo in six eight time. Then it was back to the small groups for Chinaboy, Stomping At The Savoy and the extraordinary Dizzy Spells, a Hampton rave up that hinted at the Bebop future to come.

Then cometh Sing Sing Sing. A Louis Prima composition intended for a certain crooner (who turned it down) called Sing Bing Sing it evolved in a marathon showcase performance underpinned by Gene Krupa’s dramatic use of tom tom rhythms and featuring grand solos by Harry James and B.G. Jess Stacy’s graceful piano interlude stole the show back in 1938. Allegedly. Actually it was Gene’s battering snare drum fusillade at the climax that did it for me and Mr. Pite once again unleashed all his Krupa-esque powers with magical effect.

We haven’t even mentioned Swing Time In The Rockies undoubtedly the most exciting of all the afternoon’s barnstorming performances, but that’s only because it was played again as a welcome encore. I have to confess, when Enrico Tomasso blew his trumpet so joyfully at the peak of the performance, there was a lump in my throat and tears came into my eyes. It was all too much man! 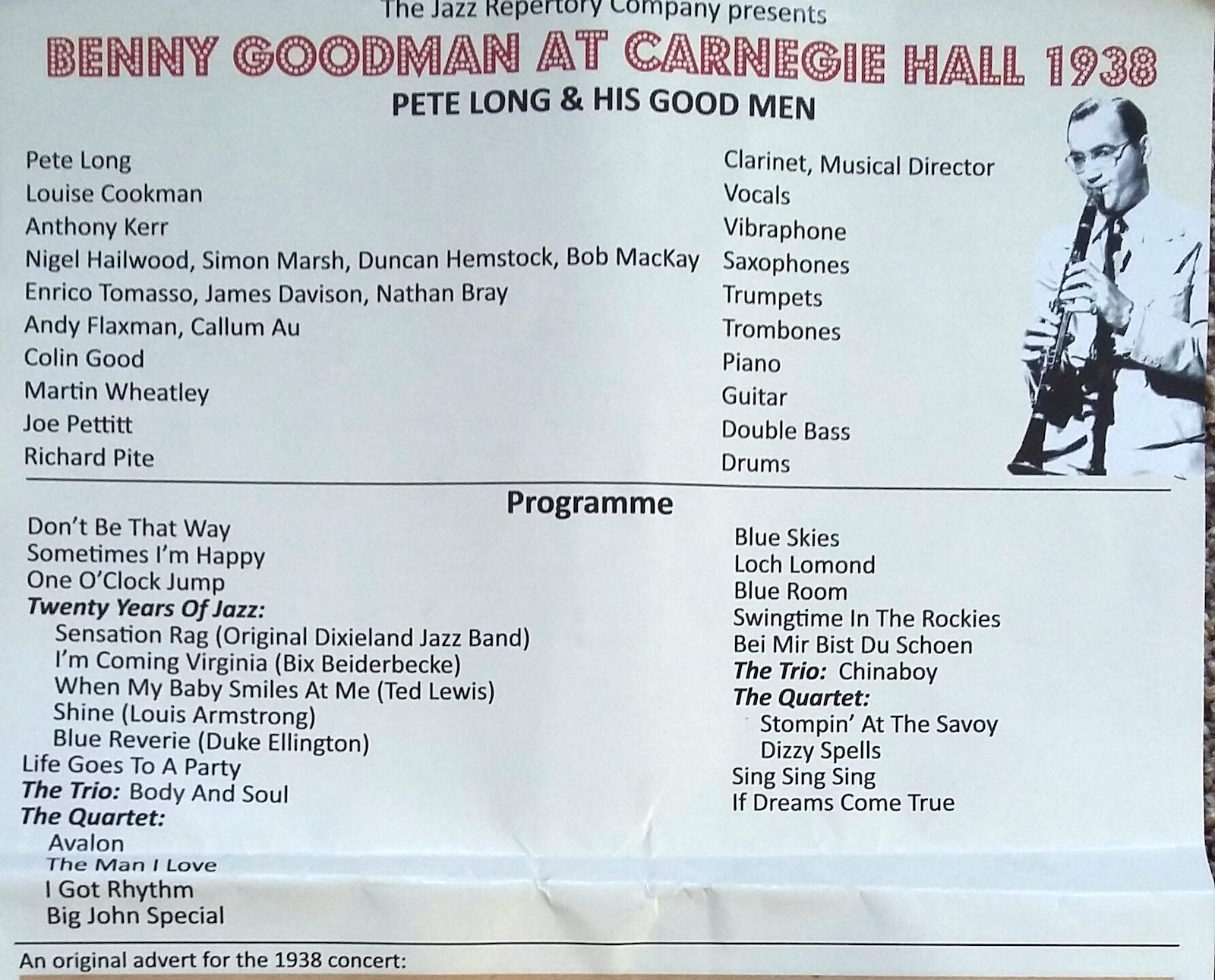