It was 50 years ago when the Jimi Hendrix Experience played an important concert at the Royal Albert Hall on February 24, 1969. Although captured on film by a team of cameramen, the event seemed consigned to history and became just a distant memory of those lucky enough to be there. 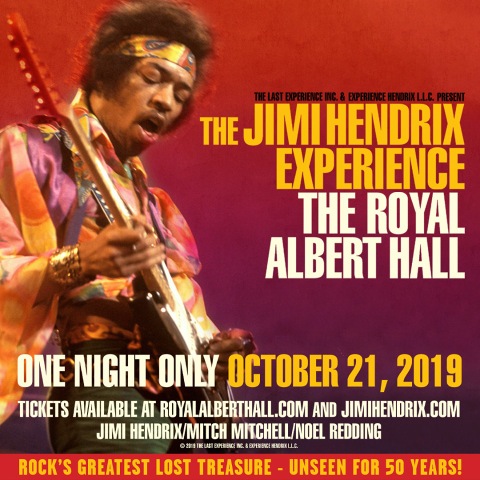 Now, for the first time, a long anticipated documentary movie of that historic event has surfaced from the archives of rock. It was shown to an eagerly expectant crowd appropriately back at the prestigious London venue, fifty years later, on Monday October 21st.

Fans arrived for the screening from all over the world, including Europe and America. It was of special interest to me, as I was there at the ‘live’ show back in 1969. Or was I? True, I had written a glowing review in Melody Maker. But as colourful images flashed across the huge screen suspended above the stage in today’s Royal Albert Hall and the music of the powerhouse trio roared around the vast building, I began to have my doubts.

Clearly, this WASN’T the same show I had seen. It was vastly better, more exciting and reached a climax that was frankly staggering. In fact it was so good I had to revise my conclusions about the Experience long embedded in rock consciousness. I’d happily recalled the impact early club appearances by the newly arrived guitar hero from America had on London’s music scene. We had all delighted in the hit singles, the studio albums and the first full on concerts at the Saville Theatre and beyond.

But there were also memories of disappointing outdoor festival gigs, at Woburn and the Isle Of Wight when Jimi seemed lost and the band disjointed. This wonderful film swept away all of those negative thoughts. No matter how many times I’d seen The Experience in the past, this was like seeing them at their absolute best – for the very first time.

So, the Royal Albert Hall concert I reviewed was held on February 18, 1969 and not the one on February 24th. It hadn’t been filmed because the lighting in the hall wasn’t sufficiently bright. On that occasion, the Experience was supported by a post-Traffic group billed as Mason, Capaldi, Wood & Frog plus Soft Machine. The show was okay, if not wonderful.

Back to the future. Now we could see the real Jimi Hendrix close up in action, a masterful, pioneering, innovative guitarist, a singer steeped in the great tradition of American blues and folk music and a real human being, a personality exuding the ultimate in cool, humour, passion and intensity.

The film produced by Jerry Goldstein and withheld from public view for so long due to the machinations of the music biz, is not only a fitting tribute to Jimi’s memory. It is also a time machine that brings back the atmosphere of the Sixties, its people, fashions and attitudes. How the audience at the screening jeered at the moustachioed commissionaire seen trying restrain over enthusiastic hippies!

How wonderful to see the roadies, technicians, managers, girlfriends, and all the beautiful people of the flower power scene swirling around Jimi, Mitch and Noel like satellites, backstage, at sound checks, driving in limos, jamming in his Mayfair flat and partying at famed nightspot The Speakeasy.

Of course it was the music we came to experience and the sheer riveting power exercised by Jimi with that fingertip control of his trusty Fender guitar, was mesmerising. There were moments when he drifted away on secretive spiritual journeys, then came the blasting back down to earth, crash landing into total funk grind, all the while unleashing familiar riffs and teasing melodies.

Stone Free set us free from the outset. It wandered through different grooves but was always brought under control by the drummer and bass player, loyally responding to Jimi’s changing musical moods. A nod here, a glare there – there was no mistaking his unspoken directions. And when Jimi turned them loose, it was Mitch Mitchell who shone with a tumultuous drum solo that drew cheers from an audience not even at a ‘live’ concert but straining their necks to gaze up at the pulsating screen.

Mitch was always a highly regarded drummer even from his R&B days with Georgie Fame & the Blue Flames. His freewheeling style blossomed with the Experience, but could be erratic at times. Not so on the night in question. As the tiny figure launched into an astonishing assault on his double bass drum Ludwig kit, he disappeared in a mass of flying hair and shining cymbals. All we could see were the sticks flailing. On that night he out-drummed ‘em all, Baker and Bonham included. (He certainly deserved that Rolls Royce we saw him being chauffeured around in later in the movie).

Noel Redding too stayed on the ball throughout. While never the focus of extensive camera attention, (given that all eyes were on Jimi), his bass playing gave sturdy support for Mr. Hendrix and Noel formed a perfect team mate for Mitch in the rhythm section.

As the show progressed Jimi embarked on a series of hypnotic performances playing such songs as Lover Man, I Don’t Live Today and one of my favourites, the ultimate blues anthem Red House. We leapt from our seats for Foxy Lady, Fire, Little Wing and Voodoo Chile (Slight Return), and sprawled exhausted for Purple Haze, the wonderful Wild Thing and Jimi’s tilt at the Star Spangled Banner, an anthem the former paratrooper must have heard played many a time during his 101st Airborne days.

‘Thank you very much!’ Was all Jimi could say to his audience after such a physically exhausting and emotionally draining performance that saw him kicking over Marshall amps and smashing a guitar to smithereens and finally hurling the broken neck out into the once restrained and now hysterical audience.

No wonder he had tears in his eyes as the artist sat later, alone for once, in the dressing room. If you can hear us…thank you Jimi, Mitch and Noel.