A TRIBUTE TO JON HISEMAN

MAGICIAN OF THE DRUMS 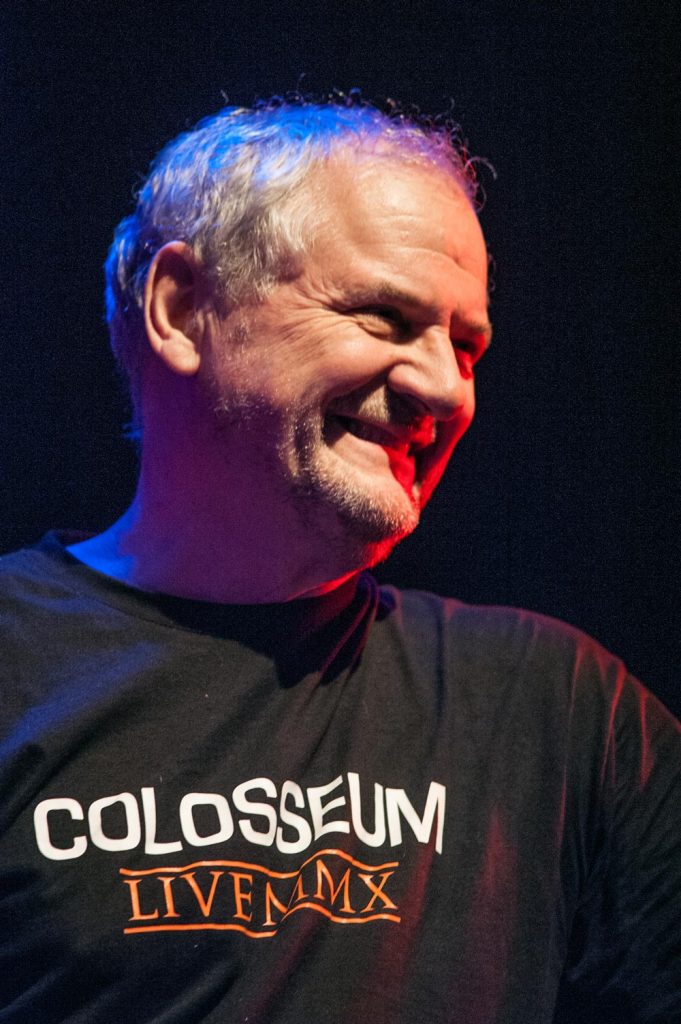 When Jon Hiseman passed away in the early hours of June 12, 2018, he left a huge void in the lives of family, friends, fellow musicians and all those he had met and inspired during a lifetime of dedication to music.

An inspirational force of energy, he tempered his enthusiasm, ambition and passion for hard work, with all the good humour and communication skills of a supremely intelligent and gifted man. When Jon launched into a conversation, the world listened, learned and came away feeling enriched.

Whether it was mastering the art of drumming, leading his world beating band Colosseum, writing song lyrics, building a recording studio or becoming a producer, music publisher and video director, there seemed to be nothing he couldn’t achieve. A combination of sharp business sense and creative instinct ensured that cherished projects were fulfilled. Even when beset by problems most would find too daunting. Jon would laugh, set his mind to work and find a solution.

On stage he was a magnetic performer, driving any band to play at its best, from his cockpit at the drums, rather like a skilled pilot getting a jet airliner off the ground and soaring into the sky. He developed his own style and techniques from an early age, by dint of practise, dedication, and with barely a whisper of orthodox tuition.

As with most things, Jon Hiseman eschewed the disciplines of schools and teachers and became his own master. He could have been a successful politician, and an asset to any governing body or major business enterprise.

Instead he chose the freedoms offered by jazz, rock and the company of all the musicians he most admired – and loved. And the love of his life was Barbara, the beautiful and gifted young musician, who played the saxophone and flute with such panache.

Jon was born Philip John Albert Hiseman on June 21, 1944 in Woolwich hospital, London, to Lily Catherine and fire brigade officer Philip William Hiseman. He and his younger sister Gillian grew up in the family’s flat in Blackheath before moving to a larger house in Eltham.

Jon’s mother loved classical music and Jon was sent to piano lessons for two years, passing his Grade 1 Exam at the Royal College of Music. He even played violin at for a while. At the age of 12 he took a newspaper round and one of the papers he delivered was Melody Maker, the musician’s newspaper that he used to read avidly before popping it into the correct letter box. Little did he know that one day he would be reading about himself in Melody Maker, in a centre spread article proclaiming him as one of the Magnificent Seven of rising new wave of rock drummers.

But that was before a variety of influences had come to play on the teenager during the 1950s, from Lonnie Donegan and Skiffle to Little Richard and Rock’n’Roll. Keen to play the drums his father made him a drum kit out of a handy paint can, vellum, bamboo and shoelaces. Even his drumsticks were home made.

Eschewing formal drum lessons, Jon watched other drummers to see how it was done. He was also fascinated by the art of the juggler and the kind of magic tricks his father employed at parties. When Jon finally emerged playing with local groups, following hours of practise, it did seem as if his amazing command of the art of drumming was a kind of magic.

Among his earliest friends was pianist and later Hammond organist, Dave Greenslade, who he met at a church youth club. With other pals they formed a skiffle group and won a church competition, even though they were actually playing along to a Lonnie Donegan record. After many youthful musical adventures, Dave and Jon formed a jazz trio with Tony Reeves on bass. Dave felt sure this laid the ground work for their ultimate group together, Colosseum.

On leaving school in July 1962, he became a marketing management trainee and was offered a full time with job Unilever after impressing the directors with his business acumen. Working in financial, legal and organisational departments would prove valuable experience when setting up his own businesses.

At the same time Jon was nurturing a desire to get out of the office environment and become a full time drummer. Together with Dave Greenslade he joined the Wes Minster 5 R&B group and began playing tunes like Green Onions at American air bases and London’s Flamingo Club.

In 1963 Jon was also playing with the Ian Bird Sextet at the Green Man pub in Blackheath where one of the guests was alto sax player Graham Bond. The club was run by Colin Richardson, who would later go on to manage the New Jazz Orchestra and Colosseum. Among the other guests were star musicians like Tubby Hayes, Ronnie Scott and Ian Carr. 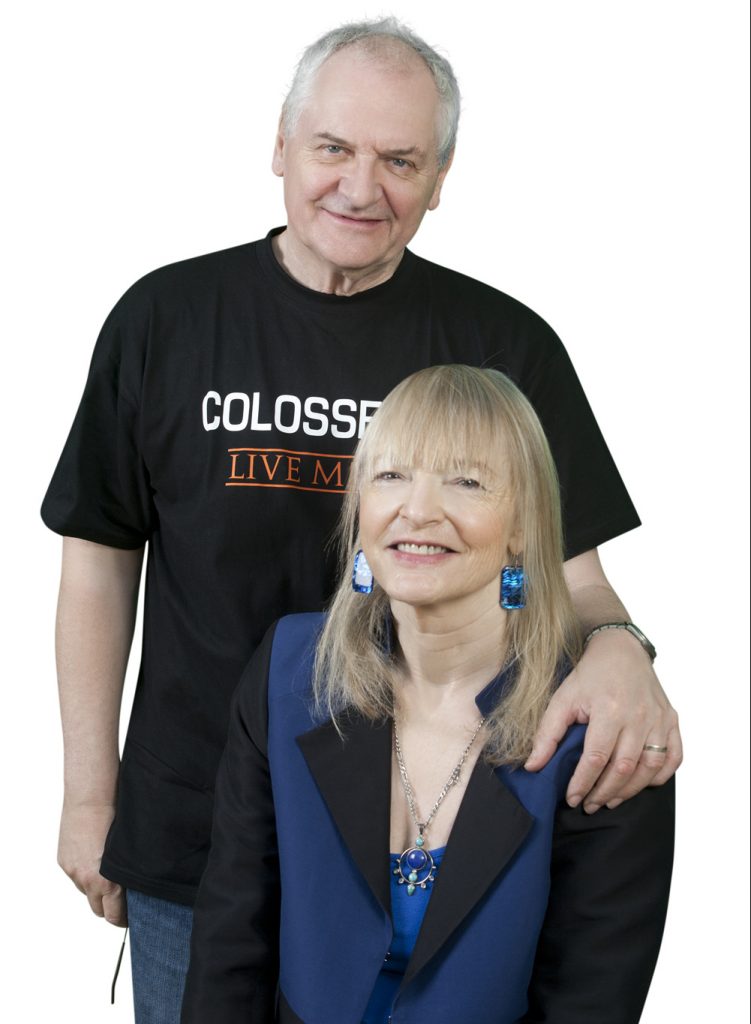 The New Jazz Orchestra was born out of an earlier rehearsal ensemble and was led by conductor and arranger Neil Ardley and included Dave Gelly, tenor saxophonist, journalist and a friend and champion of the drummer. At the same time Jon played with pianist Mike Taylor’s quartet and Group Sounds Five, that got early bookings at a night club run by the notorious Kray Twins in Stoke Newington.

As work increased Jon left Unilever, determined to make a living on the music scene. While still with the NJO he met Barbara Thompson, then a student at the Royal College of Music.

When Barbara arrived for a rehearsal one day with the Orchestra, Jon was immediately smitten. He saw her sitting in the front row with the other saxophone players and said later: “She was breathtakingly beautiful. I had to keep tearing my eyes away and trying to be cool about it.”

Barbara had played with Ivy Benson’s 15-piece all girl band and also played with student jazz bands while at RCM studying classical clarinet. It wasn’t long before Jon and Barbara were going out together and eventually married in 1967.

Meanwhile, Jon was working at a frantic pace, taking interim jobs as a TV market researcher and a band booking agent. He recorded the album Local Colour with pianist Peter Lemer’s Quintet before being approached by Graham Bond to join his group. In July 1966 he was asked to replace Ginger Baker, who was busy forming Cream with Jack Bruce and Eric Clapton. It would prove a momentous turning point.

Jon joined the Graham Bond Organization that had Bond on vocals, alto sax and Hammond Organ and Dick Heckstall-Smith on tenor and soprano saxes. Their fusion of jazz and R&B was both exciting and ground breaking. Ginger had been Bond’s star drummer, playing extended solos on speciality numbers like Toad to great acclaim. However, club audiences would soon be impressed by the dazzling expertise of the band’s new recruit, especially when he played his own showcase solos.

He was now ‘Playing the Band’ as he would later describe his approach to drumming. Jon received a rave review in Melody Maker when the band played at the Marquee Club adding power to dramatic arrangements like Wade In The Water and Walking In The Park. By now he was playing an expanded kit with double bass drums played with unerring speed and accuracy. Soon Jon would be rated alongside John Bonham, Mitch Mitchell and Keith Moon among the most dynamic drummers of the era.

The following year Jon played drums on the New Jazz Orchestra album Le Dejeuner sur l’Herbe, and on Jack Bruce solo albums Things We Like and Songs For A Tailor. Simultaneously Colosseum released their debut album Those Who Are About To Die Salute You (1969) with a line up of Heckstall-Smith, Dave Greenslade, Tony Reeves and guitarist James Litherland. The band became a success, performing ‘live’ to ecstatic audiences at clubs, concerts and festivals and releasing follow up albums Valentyne Suite (1969) and The Daughter Of Time (1970).

They released three albums before Jon decided to retreat from heavy rock and join forces with Barbara Thompson’s popular jazz and classical group Paraphernalia in 1979.Together they also performed in a studio band for theatrical impresario Andrew Lloyd Webber and his brother cellist Julian Lloyd Webber, creating the classical rock album Variations (1978) which yielded the distinctive theme tune for ITV’s The South Bank Show.

Their combined energy during the Eighties saw the creation of their own recording studio, where they provided music for films and TV advertisements and they also formed their own publishing company Temple Music. Jon and Barbara were also part of the United Jazz + Rock Ensemble, combining British and German jazz musicians who unleashed a plethora of albums.

In 1994 came the momentous decision to reform Colosseum and carry on touring and recording, Barbara taking over saxophone duties, following the death of Dick Heckstall-Smith in 2004. In 2010 Temple Music published Playing The Band, Jon’s fascinating autobiography, a major project written in collaboration with author Martyn Hanson. Meanwhile Colosseum played on until its farewell concert in 2015.

THE HEROES OF JCM 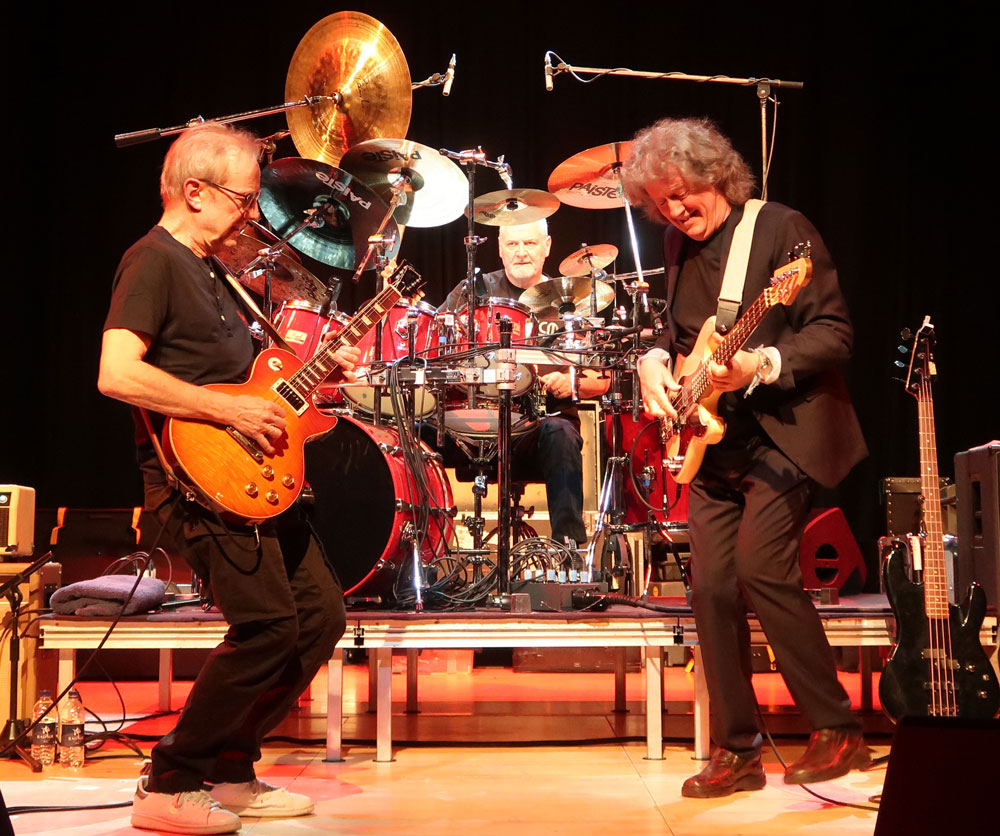 The Hiseman family tradition of musical innovation continued when Jon and Barbara’s daughter Ana Gracey developed her talents a fine singer. She released her own album Wicked Games a collection of excellent pop songs, notably Sam Smith’s Stay With Me, and Meghan Trainor’s All About That Bass all given a sultry jazz treatment.

Her backing band had Dad playing drums, Barbara Thompson MBE on saxophone and Peter Lemer on keyboards, as well as guest appearances from Clem Clempson. Jon of course, filmed one of its photographically advanced promotional videos.

Always keen for a new challenge, in April 2018 Jon formed JCM, an exciting new trio with Clem Clempson, back on lead guitar. Clem had toured the world with Steve Marriott in super group Humble Pie in the intervening years. The group was completed with the addition of another Colosseum veteran, their lead singer and bassist Mark Clarke.

Their debut album Heroes (Repertoire Records) was intended as a tribute to many of Jon’s former collaborators and idols who had passed away over the decades, notably Jack Bruce, Gary Moore, Allan Holdsworth, Ollie Halsall and Dick Heckstall-Smith.

It was during the European tour intended to launch JCM that Jon was suddenly taken ill and had to be flown back to London from Bonn for urgent medical treatment. Sadly it was revealed that he had a brain tumour and Jon took the brave decision to go ahead with immediate surgery. When asked why he told doctors it was ‘For Barbara.’

Complications after his operation resulted in his lapsing into a coma from which he never recovered. Jon Hiseman died peacefully at 3.55 a.m. on June 12 at the hospice in Sutton, with Barbara and Ana at his side.
Although it seemed as if JCM would not be able to survive his passing, he would have been delighted to know that Clem and Mark were determined to carry on with the project and play the final dates of their scheduled tour with guest drummers.

Jon was always generous in his praise for other musicians and expressed his admiration for the drummers who inspired him in his youth, from Gene Krupa to Elvin Jones. He gave encouragement to his friends and strength and love to his family. Ultimately he too will be remembered as a hero – for all that he gave, and all that he played.