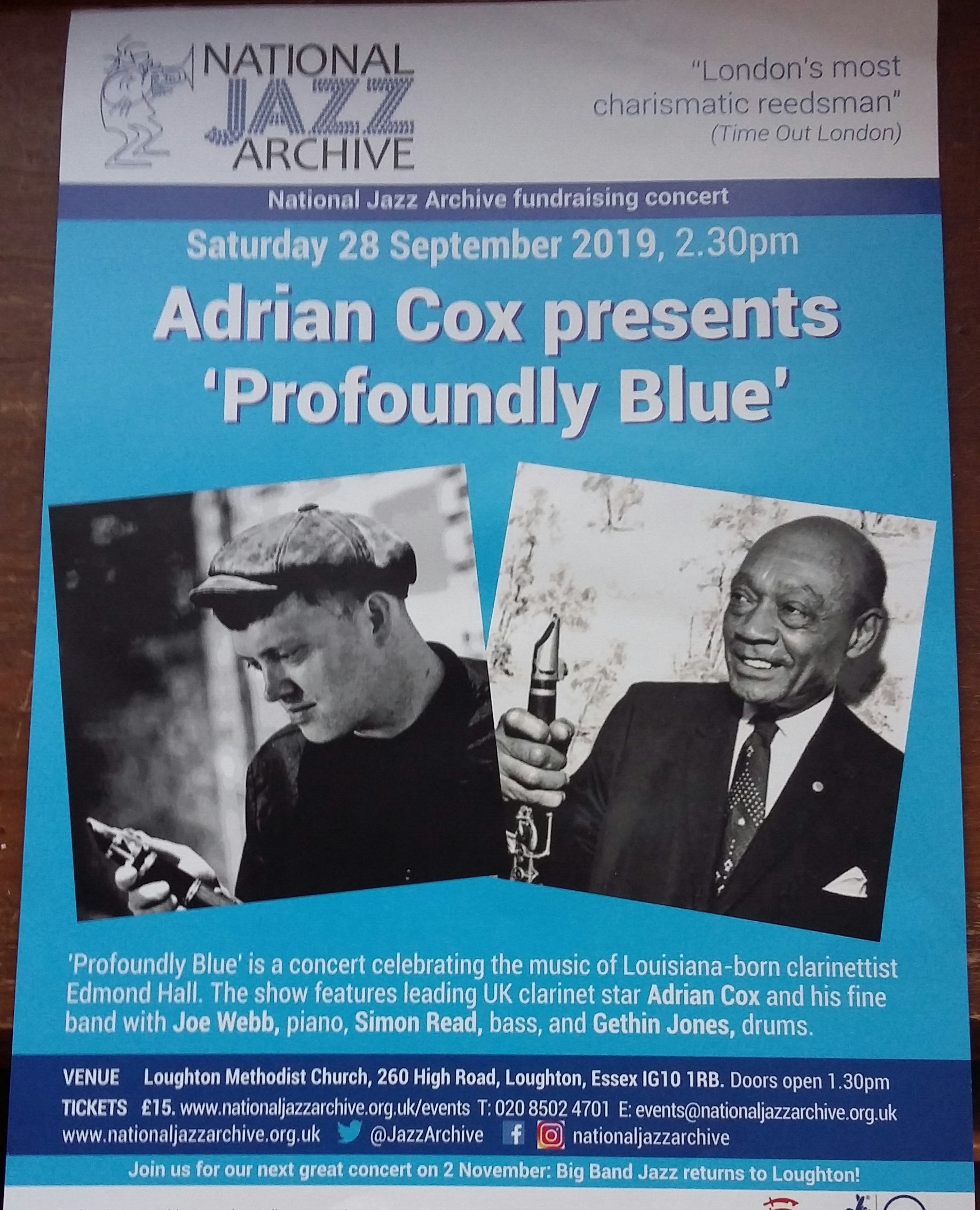 Adrian Cox delighted an enthusiastic audience with his Profoundly Blue show performed with an excellent quartet at Loughton Methodist Church last September. The concert was a fund raiser for the National Jazz Archive but it also raised the spirits of all those entranced by Adrian’s exuberant clarinet playing and charismatic stage personality.

The show was designed as a tribute to one of his favourite clarinettists, the late great Edmond Hall, who career spanned the 1940s classic jazz era. While perhaps lesser known than his contemporaries Benny Goodman, Jimmy Noone and Buster Bailey, Edmond Hall developed his own powerful, highly personal style when he played alongside Louis Armstrong and many other great stars.

Adrian was supported in his venture by the gifted Joe Webb, who played grand piano with all the grace and command of such past masters as Teddy Wilson, Billy Kyle and Mel Powell. He also displayed his own personal style, notably when interpreting the songs of Duke Ellington and the pleasingly varied selection of tunes that were part of a tightly conceived set.

This was no ‘glance at the audience, stomp the feet and improvise routinely on some nameless blues for 10 minutes’ type of gig. Adrian and Joe, given superb support by Gethin Jones (drums) and Simon Read (bass), kept the numbers short, which ensured all solos were tightly conceived and themes explored with due care and attention.

In between songs (yes, Adrian sings as well), our host told informative stories about Edmond Hall’s life and gave important details of his recording sessions. Who knew he once recorded with Charlie Christian and Meade Lux Lewis? A rarity I am now determined to track down.

The show began with Dardanella a wonderful tune, with a tremulous piano motif launching the clarinettist into nimble fingered action. But this was just the start of something good. Adrian dived into a version of a famous martial melody all clarinettists aspire to attempt. Dancing in front of the microphone he stormed through High Society at such incredible speed it drew gasps from the lady Mayor of Loughton Cllr. Stella Murphy, sitting beside me in the front row.

Her loyal townsfolk also burst into applause that only abated when the group was ready to swing into Where Or When, a tune Mr. Ed had recorded with Teddy Wilson in 1944. Then came Swinging from another vintage Hall session with pioneering drummer Baby Dodds, which allowed Gethin Jones space for some nifty ‘fours’ and more on his carefully tuned Gretsch snare drum.

The Man I Love was the perfect ballad setting for Adrian at his most expressive, as he explored the highest and lowest registers, adding trills and growls with all the passion of a true jazz musician.

But there was no time to slouch. Barely had mouthpiece and reed been wiped clean when it was time for an exhilarating Clarinet Marmalade. Adrian delivered the finger buster, first recorded by Larry Shields of the Original Dixieland Jass Band way back in1918 with alacrity to match any of his illustrious predecessors.

Don’t Give Me Sympathy with amusing, laconic lyrics was sung by Adrian, bouncing on his heels and toes and engaging in telepathic communication with his drumming man. The first set was concluded with an Ellington medley in which the audience was challenged to name all six tunes. I managed three including Don’t Get Around Much Anymore, Mood Indigo and Take The A Train (obviously) but missed Prelude to a Kiss among others.

The second half began with a rousing Rumpus On Rampart Street an up tempo Ed Hall favourite with a bopping theme he’d recorded in the late 1940s. This was followed by Neighbours (“Not that one” quoth Adrian), with Gethin offering deft brush work before shifting to sticks and press rolls. The clarinettist burst into song with a solid back beat from the rhythm section that gave way to subtle hand drumming and a fading bass note from the ever ready Simon Read.

Now it was time for a full on drum solo unveiled at the climax of an exotic Charlie Shavers’ tune Dawn Of The Desert. Adrian extemporised as the bass and piano laid out and Gethin attacked his tom toms with Krupa-esque zeal. Meanwhile the tunes kept a coming with a nimble Jazz Me Blues and Hall’s Ghana inspired African Tempo. Adrian told the tale of Edmond’s first visit to Africa with Louis Armstrong when they were greeted by 10,000 people.

Hall was moved to return to Ghana to set up a music school for young people, but sadly had to give up after four months as the pupils failed to practise and faded away. Adrian closed the show with Hallalujah and a well deserved encore Not That One which swung like the proverbials.