London pubs have long played an important role in the dissemination of jazz to an eager public, while providing regular work for itinerate musicians, always thirsty for gigs and appreciative audiences.

With an enthusiastic landlord at the helm and a regular crowd of knowledgeable fans, the humble public house often served as a more accessible alternative to specialist jazz club venues. We speak in the past tense, because so many pubs have closed in recent years, resulting in fewer outlets for bands to have a carefree blow and welcome ‘sitters in.’

Until recently Greenwich in South East London was home to many taverns that supported live music including The Cricketers, now a fish’n’chips parlour and the late lamented Lord Hood in Creek Road that stood next to the Up The Creek comedy theatre. Its closure in December 2015 and subsequent demolition, despite a vigorous ‘Save the Hood’ campaign, left regulars bereft, a tradition ended and a large housing block in its wake.

Surprisingly perhaps jazz fans and musicians came from all quarters of the globe to head for the humble Hood that established a reputation for great music and a good time atmosphere during its golden years. The carpet may have needed replacing, the roof leaked and one of the windows was boarded up. But customers didn’t care as they arrived from Canada, Australia and even way down yonder in New Orleans to watch the bands, sing and have a blow themselves.

Situated not far from the Cutty Sark it was ideally placed to welcome tourists. The landlady Helen and her all-girl bar staff promoted ‘live’ music and the result was a diverse menu of modern, swing, trad jazz and skiffle, folk and disco available most days of the week. The well attended Thursday afternoon sessions featured the resident Brunch Bunch, a convivial septet led by bass player George Bridges that supported an array of guest stars.

George also organised the Greenwich Riverfront Jazz Festival which used the Lord Hood as one of its venues. An all-day Saturday session saw half a dozen or more bands queuing up to play. There were many other special events. When the spectacular London Marathon passed the pub’s garden gates, the band performed outside to an audience of 30,000 people – all running away. And when Hurricane Katrina devastated New Orleans in 2005, that city’s Treme Brass Band later toured the U.K. and was invited to play a special day at the Hood that drew a massive crowd raising £1000 for storm relief. Assisting George with booking special guests was jazz ‘angel’ antiques dealer the late Warwick Leadlay. 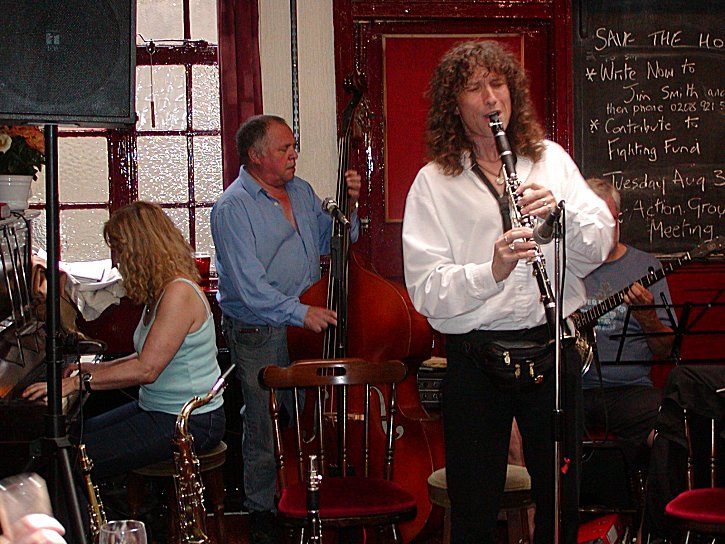 He subsidised a supply of guest stars, notably poll winning clarinettist Julian Marc Stringle and soulful pianist and singer T.J. Johnson. Others top musicians welcomed to the bar were tenor saxophonists Adrian Cox and Johnny Boston and double bass player and singer Trefor Williams. One afternoon in May 2008 Adrian, TJ and trombonist Sky Murphy teamed up for a rousing version of Lester Leaps In that resulted in a JATP style jam complete with Adrian’s wailing tenor sax solo, blown in the spirit of Illinois Jacquet.

Julian Marc Stringle also played tunes like Running Wild during his visits, memorably recreating the sound of the Benny Goodman quartet, backed by just piano, bass and drums. Recalls Julian: “It was a shame the Hood closed down because the pub had such a great atmosphere. It was one of those lovely old London pubs sadly disappearing forever. I was booked to play there thanks to Warwick Leadlay. He had an antiques shop in Greenwich and owned Starborough Castle out near Edenbridge.

“Warwick ran a jazz festival in the lovely grounds which I used to play in with Digby Fairweather’s band. He eventually sold Starborough and bought a place to live in Greenwich. It was through singer Julia Farino that I ended up at the Lord Hood because I played London dates with Julia and we recorded an album together. Warwick was her manager and asked if I’d do a guest spot with her and the Brunch Bunch.

“I used to have a roast chicken lunch at the Hood which cost just £2.50 and they had a fine selection of ales. I got the train there so I could have a nice pint of bitter. There was a lovely ambiance when people danced and listened to the music and it was so intimate. The band was right on top of the crowd listening to the jazz and I really liked that.

“We sat right in front of a dart board pinned on the wall. Oh God, yeah, that was a bit scary! We hoped nobody would start a game of darts while we were playing. It was just a great place to pop in and have a blow with chaps like Nick Waylen on clarinet who was very good.” 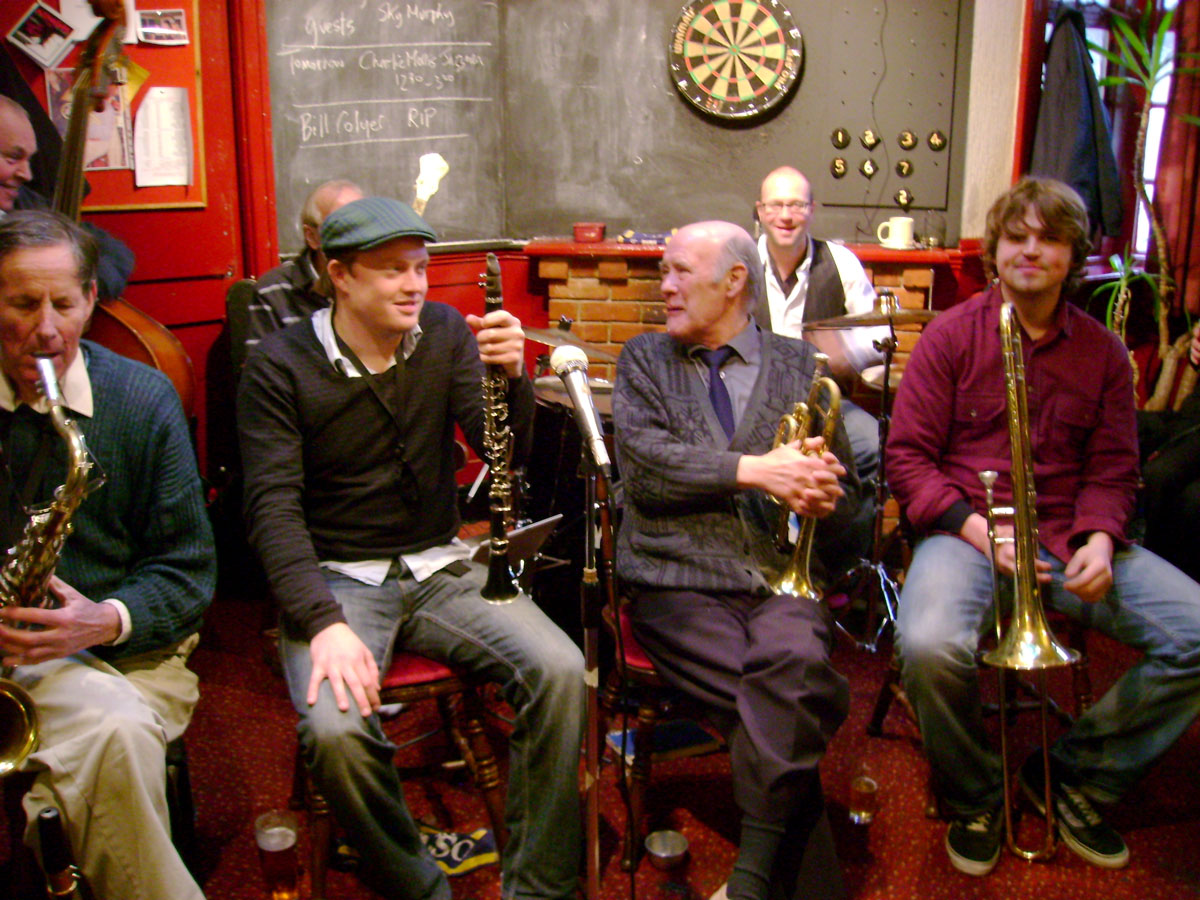 John Hassel (tenor sax) and Dominic Gove (guitar) were backed by brilliant double bass player Matt Ridley, who now plays with the Darius Brubeck quartet. But it was the traditional jazzmen that formed the bulk of the cavalcade making their way to the back of the pub, to find a space in front of the fireplace and the dartboard, between the exit doors and a gents’ toilet.

With a somewhat battered PA system and well travelled upright piano at their disposal, singers such as actor Arthur Nightingale, Julia Farino, Christine Tyrell, Mary Wilkinson and Eileen Ford grabbed the mike for a chorus or three on the Don’t Mean A Thing If It Ain’t Got That Swing and My Funny Valentine.

As well as Terry Sullivan on the keys, pianists included the lively Becky Liebman, Hugo Simmons and Holly Roberts, while among string pluckers and bowmen happy to borrow George Bridge’s bass were Dave Silk, Mick Wilkinson and Jim Belcher. Using his own upright electric bass was the multi- instrumentalist Mick Scriven who also played a mean rock’n’roll set at the old joanna when cheered on by the crowd.

Hardest working men at the back of the band were of course the percussionists who included Bill Traxler, Bill Tolman, Fred Stead, George ‘Washboard’ Murray, Laurie Chescoe, Tony Blackburn and Trevor Harrington all hoping to be given the nod for the odd drum break. As well as the Brunch Bunch, another popular jazz band to appear regularly at the Hood was the one led by enthusiastic banjo player Charles Morris. They often played at the Christmas Parties, the Riverfront Festival and in a second Thursday afternoon slot, following lunch with the Brunch

While Darius Brubeck never jammed at the Hood other legendary pianists popped in such as Johnny Bad Penny Blues Parker and George Webb, revered founder of the British Traditional Jazz movement. When demolition began in 2017, amazingly the dart board stayed on the back wall right to the end, no doubt pounded in place by years of Lester Leaps In and Tiger Rag.

Research: Many thanks to George Bridges, Julian Marc Stringle and Mark of Ealing, photographer and YouTube Video maker.