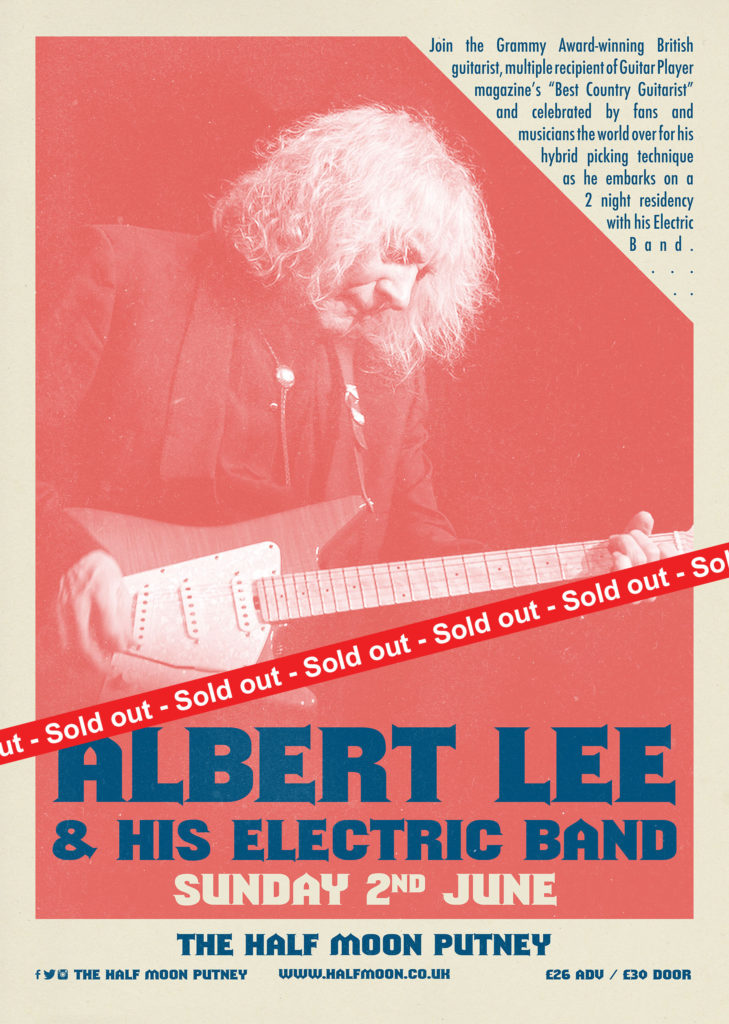 Happy Guitar was a hit song for Tommy Steele many years ago, but we can experience true happiness, here and now, whenever Albert Lee picks up his favourite guitar and plays the music he loves.

It was certainly the case when Albert and his young and gifted backing group arrived at the Half Moon, to play two steaming sets before a packed and enthusiastic audience. Whoops and whistles greeted a roller coaster ride of country, hillbilly and rock’n’roll songs that perfectly suited the style of the virtuoso musician long known as the guitar player’s guitar player.

When you consider Albert has been first choice as a sparring partner for Eric Clapton, a catalytic force behind the Everly Brothers and a welcome recruit to the Crickets, then we can understand why he has gained such universal respect.

He was already a formidable talent, even back in the days of Chris Farlowe & the Thunderbirds when he played soul and the blues with the iconic Sixties singer. Albert grew up on a London music scene when an astonishing array of axemen roamed the night clubs from Jeff Beck and Jimmy Page to Peter Green and of course old Slowhand himself. Yet Albert always held his own and impressed everyone who heard him play with such expertise and cool assurance.

As musical trends and fashions changed in the Seventies, so Albert made the career choice to concentrate on playing country style. He relocated to the USA where he found greater opportunities and earned even more respect. After playing with the promising British group Head, Hands and Feet, his American odyssey saw him touring with many of his heroes, including the Crickets and the Everly Brothers, and performing with Emmylou Harris’s Hot Band and alongside Eric Clapton for many years. But it was the establishment of groups such as Hogan’s Heroes that led to Albert becoming a front man at last – singing and playing keyboards as well as his trusty Telecaster.

The result of this lifetime of musical experience was demonstrated at the Half Moon during a wonderfully entertaining evening. The self effacing star played his signature ‘Albert Lee’ model Ernie Ball Music Man guitar with a speed and dexterity matched by a driving sense of rhythm and his love of a strong melody.

Albert was given enthusiastic support by Ben Golding (bass guitar) and Ollie Sears (drums) with Ross Spurdle on keyboards, who all played with great energy and panache. The set included many Buddy Holly songs notably Well All Right also memorably covered by Clapton with Blind Faith. ‘I was a huge fan of Buddy Holly,’ Albert recalled ‘And one day I became a Cricket!’

He also played another Holly classic Rock Around With Ollie Vee that evoked the spirit of rockabilly at its foot stomping best. Between songs Albert told the sad tale of how he managed to miss seeing Buddy Holly ‘live’ on British TV shows twice as a kid, through sheer bad luck and mis-timing.

Another more relaxed favourite was Wheels a Gram Parson song for the Flying Burrito Brothers. With a sly smile Albert also mentioned Gram’s rather more obscure International Submarine Band. ‘We’ve all got those records haven’t we?’

An incredibly fast rave up rocker by Carl Perkins drove the seated crowd to want to leap up and start jiving, if only they’d been at a barn dance and not the back room of the saloon bar. Well folks, I confess. I had to miss the second set because of engineering works on nearly every railway line that night and I was homeward bound. But Albert will be back at his favourite pub gig soon and so will all his fans, eager to hear Country Boy one more time. Me included. CHRIS WELCH