While the world was celebrating Mankind’s first space trip to the Moon, Rick Wakeman celebrated his 70th birthday with his own unique musical expedition – a Journey to the Centre of the Earth!

Normally it is considered best journalistic practice to avoid the use of exclamation marks. But in this case we make an exception. Not only was Jules Verne’s story a wonderful yarn and a pioneering work of science fiction, the multi-faceted concept that Mr. Wakeman was inspired in compose in its honour is equally exciting and one that merits a loud cry of wonder. 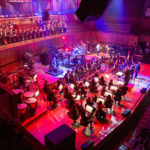 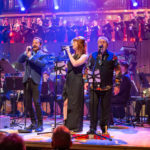 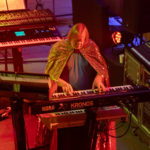 As cheers rang out in the Hall of the Prog Rock King, it was moving to see Rick, clad in an array of glittering capes, being greeted as the bold explorer arriving at his dream destination at the climax of such a sensational show.

In the original Verne story the German explorer Professor Otto Lidenbrock is convinced he can reach the centre of the planet by descending into the vent of an extinct Icelandic volcano. Having read an ancient Icelandic manuscript he finds a coded message in a runic script by alchemist Arne Saknussemm. Once translated it explains how it was done.

The impatient Professor immediately plans his own expedition and takes with him his nervous nephew Axel and silent but strong guide Hans. As they descend into the darkness, they encounter many adventures, get lost, discover an underground forest and a stormy sea, witness a battle of subterranean monsters and finally escape and return to the surface, emerging from another volcano, Stromboli in Southern Italy.

Now how do you put all that into music? Simple. You recruit the services of friends, family and a stage full of brilliant musicians to bring your concept to life. And just as Professor Lidenbrock shot out of the mouth of a volcano, to be hailed as a hero, so Rick Wakeman emerged from his fiery performance to a standing ovation.

But how did it all begin. Gather around the camp fire and pray silence. T’was some 45 years ago when I was invited to Rick’s home for an exclusive interview about his future plans. After dinner he switched on a Revox tape recorder and played the first demos of his next album. A star performer with Yes, the ultimate poll winning super group of the Seventies, Rick had already gained personal success with his debut solo album The Six Wives Of Henry The Eighth. Now he was preparing the follow up which turned out to be an even bigger hit. Work on Journey to the Centre of the Earth had actually begun in November 1971 but was put on ice (or under molten lava) until the completion of the Six Wives the following year.

The work was specifically written for a full orchestra and choir and Wakeman explained that it wasn’t an attempt to fuse a rock group with an orchestra, in the style of the late Jon Lord’s Concerto with Deep Purple. Even so, his own powerful English Rock Ensemble played an important part, adding its own colours and sound to the classical elements of the piece.

The album was launched with an historic concert at the Royal Festival Hall, London on January 18, 1974 featuring Rick with the London Symphony Orchestra and the English Chamber Choir, with the actor David Hemmings serving as narrator. The performance was only 36 minutes long with a six minute encore. It was given glowing reviews, even by the NME and the album sold 15 million copies.

Just as Professor Lidenbrock suffered frustrations and delays in his epic journey, so Rick experienced the agony of discovering in 1981 that the entire original score for the orchestrations had mysteriously disappeared en route to Brazil where Journey was meant to be performed.

Rick: “Then in 2009 a battered and water damaged conductor’s score appeared in a packing case that arrived out of the blue from Australia. This meant that restoration work could be carried out by conductor Guy Protheroe and after an absence of 35 years ‘Journey’ could be performed again”.

There was an added bonus .Rick could now use two missing songs , extra narrative and instrumental and solo passages omitted from the original single A&M album version. (It was intended to be a double album). All this could now be included in the last ever ‘live’ performances of the complete work, held at the Festival Hall on July 13 and 14.

Sunday evening’s show began with a dramatic flourish even before a note was played. A mighty cheer went up from the audience as breaking news swept around the South Bank. Rick strode on stage at exactly 7.30 p.m. to make an important announcement. England had just beaten New Zealand and won the Cricket World Cup after a breath taking ‘super over’ final at Lord’s. A brief period of rejoicing was allowed, before Rick introduced the various players in his own musical test match.

Beneath the grey metallic tubes of the RFH’s pipe organ stood members of the English Chamber Choir. Before them sat the serried ranks of the Orion Orchestra, complete with strings, brass, woodwinds, a harpist and percussion player. The English Rock Ensemble on the other side of the stage was powered up by guitarist Dave Colquhoun with Matt Pegg on bass guitar and Tony Fernandez on drums, the latter having batted and bowled for Rick’s team since 1975 alongside founder member singer Ashley Holt, a veteran of the original Journey performances. Adam Wakeman, hot from the Ozzie Osbourne band was also on hand to play extra organ.

Waiting to set the scene and tell a complex story with theatrical skill was celebrated actor Robert Powell. With conductor Protheroe raising his baton, Rick, clad in a black cape and glittery green necklace, strode into his encirclement of keyboards and plunged into the bowels of the earth. Well, actually he just started playing and remained mercifully in full view on the surface of the stage throughout a thoroughly enjoyable show.

Singer Hayley Sanderson, famed for her role on BBC TV’s Strictly Come Dancing told how Prof. Lidenbrock headed from Hamburg to Iceland to enter the tunnels that would lead into the netherworld. The Choir then sang with heavenly joy as the explorers found a life giving underground stream of water that served as a faithful guide.

When Axel got lost in the inky blackness of the tunnels Ashley sang with such tremendous power his reassuring voice alone could have secured his safety and ultimate rescue. Once Axel had rejoined Hans and the Professor the Rock Ensemble blasted into action with a long and exciting solo from Dave Colquhoun.

Battle of the Monsters

Soon the explorers had chanced upon an underground sea where they were swept along on a primitive raft by a storm and witnessed an extraordinary battle of ferocious sea monsters. All this was illustrated by Rick’s dramatic mood setting themes and melodies performed by a range of instrumentation; eerie oboes, soaring strings, fan faring trumpets, roaring keyboards and thunderous drums and guitars, all intermingled with the vocal efforts of choir and solo singers. Phew!

Ashley sang the ballad of an ancient man who had been to the centre of the earth and cried out ‘I wonder where he’s been!’ before the expedition stepped into the shaft of another ancient volcano and were blow upwards to the surface, emerging three thousand miles away from Iceland amidst the crater of Stromboli in Italy.

All this was accompanied by the Rick, now clad in a glittering blue cape, playing a funky keyboard solo that evolved into Peer Gynt’s exuberant In The Hall of The Mountain King. Joined by brass and strings, the music accelerated to a climactic crescendo. As all three solo singers, including guest vocalist Alfie Boe, returned to centre stage, the choir roared its approval and there was a reprise of Rick’s melodic theme for the brave explorers. We had arrived on time at 8.45 p.m. thanks to the precision and teamwork of these superb musicians.

But the show wasn’t over yet. More applause rang out as Rick, now clad in a red and gold cape took his bows, as someone in the audience yelled out ‘Happy birthday!’ Then it was time for a surprise return trip back to the centre of the earth, this time with the addition of extra music and more of Robert Powell’s stirring narration. Rick, Dave, Matt and Tony launched into a rock jam with a thunderous bass outing from Matt and a dynamic drum solo from Mr. Fernandez. All this was interspersed by a duel between father and son as Rick and Adam exchanged battling breaks on hand held keytars.

We can forget phrases like ‘Progressive Rock.’ This was a coming together of musicians from many schools and disciplines, all devoted to the recreation of a brilliant concept that triumphed in every which way. Jules Verne would have been proud to hear it, the music in his name, bubbling up like hot magma upon the Surface of the Earth.