It was a journey to the centre of Rick Wakeman’s heart when he performed a superb concert in a packed church as part of his unique Piano Odyssey tour. The audience cheered and even whistled when Rick played a richly entertaining selection of pop, rock and classic themes linked with jokes, anecdotes and wondrous stories.

Certainly, this was not a night for wearing capes while commanding a battery of synthesizers and organs amidst the ranks of a roaring rock band. Instead, here was a virtuoso playing with extraordinary dexterity and complete command of his chosen instrument, the grand piano. The perfect setting allowed maximum concentration on the music, albeit tempered with the good humoured asides that invoked as much laughter as rousing applause.

Clad in a smart grey suit, Wakeman sat sideways at the piano so we could see hands and fingers flying across the keyboard, outlined in a green spotlight. After an introductory piece Rick paused to reminisce about a recent U.S. Yes tour with Jon Anderson and Trevor Rabin.

“During Starship Trooper Trevor and I would go out into the audience playing, him on guitar and me on a portable keyboard. At a show in Boston, Trevor accidentally whacked me in the face with his guitar and I felt blood. ‘Bless my soul that was painful!’ I said.’”

No wonder. A tooth had broken in Rick’s jaw and he was advised to have an implant as soon as he could get to a dentist. This resulted in a long story about the appropriate treatment he received from super glue to pills. But we won’t reveal the – ahem – invigorating punch line.

Wakeman’s timing as a stand up raconteur is as good as his skill at the piano. He managed to keep the audience innocently accepting everything as the gospel truth – until a cracker of a joke exploded about our ears. Even his version of While My Guitar Gently Weeps, one of many fine performances on his hit album Piano Odyssey, was accompanied by an intriguing tale about walking along Cannes Beach chatting with George Harrison. That’s when the subject of Amazing Grace, bagpipes and Sherman Tanks came to the fore.

An exciting extract from his concept album Journey to The Centre of the Earth came complete with a pre-recorded orchestral backing and served as a preview of his forthcoming Royal Festival Hall, London shows on July 13th and 14th. It will be the last ever U.K. performance of the legendary epic inspired by the Jules Verne story. Incidentally it coincides with the composer’s 70th birthday as he confided in a back stage chat after the St.George’s concert.

There were many more superb performances from the Odyssey album including Liebesträume/After The Ball from a 1977 soundtrack album. Rick had composed music for the film White Rock about the Winter Olympics, that was premiered before Her Royal Highness Princess Anne.

Meanwhile, it was great fun to hear Beatles’ compositions like Help, played in the style of La Danse Macabre by Saint-Saens, and Eleanor Rigby played a lá Serge Prokofiev’s Peter And the Wolf. Rick’s left and right hands displayed astonishing independence while unleashing strident chords and glittering runs.

After an interval for refreshment, the second part began with the salutary tale of Rick’s involvement with Cat Steven’s 1971 hit Morning Has Broken from Teaser And The Firecat. He played the famed piano introduction and accompaniment – but alas, never got paid for the session.

In contrast came some high spirited jazz played in memory of Rick’s father Cyril who was also a pianist. It was discovered many years later that Dad had spent half of all his wages on giving the son music lessons. The pair used to play the Tommy Ladnier-Mezz Mezzrow Quintet version of Sweet Georgia Brown as a left and right handed duet. Wakeman’s ragtime solo version unleashed a storm of applause.

“Shall I play a couple of Yes pieces? Yeah!” Well, there were a lot more jokes before he launched into Wondrous Stories followed by extracts from Swan Lake and an extremely fast and feisty item from another legendary Wakeman epic The Myths and Legends of King Arthur & The Knights of the Round Table. 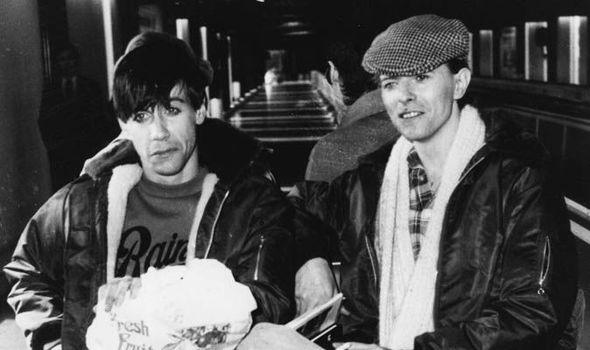 Our host then spoke of his sorrow at the loss of his friend David Bowie, who once lived in a now demolished grand old house, not far from St.George’s Church. He told how he spent happy times with David working on material for Hunky Dory later recorded at Trident Studios in Soho. “I can’t think of a better piece to finish on than Life On Mars.”

Wakeman had played the haunting song as a piano piece on Simon Mayo’s Drive Time BBC radio show on January 12, 2016, part of a tribute to David, who had died just a couple of days earlier. It was a moving performance that drew wide praise. Indeed it had encouraged many new fans in the audience to come and hear Rick in person, for the first time.

Of course, there had to be an encore and Rick Wakeman returned to deliver a special treat. It was a delightful medley of nursery rhymes from Baa Baa Black Sheep, to Hickory Dickory Dock and Twinkle Twinkle Little Star played in the styles of Mozart, Debussy, Rachmaninov and Les Dawson. And yes…he played all the right notes…in the right order.