Ana Gracey’s Wicked Games takes us on a sultry, romantic and often swinging journey through a well chosen selection of contemporary songs, given a distinctly jazzy treatment. It’s a perfect showcase for Ana’s talents as a soulful singer blessed with an impressive range and a passion for potent lyrics.

Ms. Gracey is supported by a stellar cast of players, including Peter Lemer (keyboards), Clem Clempson (guitar), Phil Mulford (bass), Jess Gillam, Adrian Revell and Barbara Thompson (saxophones) and her father Jon Hiseman on drums, in whose memory the album is dedicated.

All About That Bass, the first of a dozen songs, was a hit for Meghan Trainor when her debut single was released back in 2014. The message is all about ‘loving yourself’ according to Meghan and Ana sings with a cool , calm assurance before breaking into swing time. Firm backing chords from Peter Lemer, Jon’s tasteful drums and sultry saxophone from Jess Gillam all contribute to what must have been a fun session.

More serious is the funky Stay With Me a heart wrenching Sam Smith song from Sam’s 2014 debut album In The Lonely Hour. Peter Lemer’s cascading keyboard and Adrian Revell’s gospel rooted saxophone support Ana as her pristine voice floats towards a sanctified finale.

A gently swaying Latin treatment of This Love, a pop rock classic by Maroon 5 was composed by Adam Levine and Jesse Carmichael for the group’s 2002 album Songs About Jane. Ana amends the lyrics to sing ‘I was so high I did not recognise the fire burning in his eyes.’ Clem Clempson adds Spanish style lead guitar while Ana improvises a wordless vocalese chorus before fading out with a gentle refrain.

Wicked Game is a marvellous Chris Isaac Top 10 hit from his 1988 album Heart Shaped World featured in the David Lynch film Wild At Heart. Taken at a slow pace, it has mysterious overtones. ‘What a wicked thing to let me dream of you…’ muses Ana, her voice ranging over the highs and lows of an atmospheric performance full of poise and control.

Pounding tom toms set the mood for a raunchy and menacing Bang Bang where Ana proclaims ‘She got a booty like a Cadillac….’ 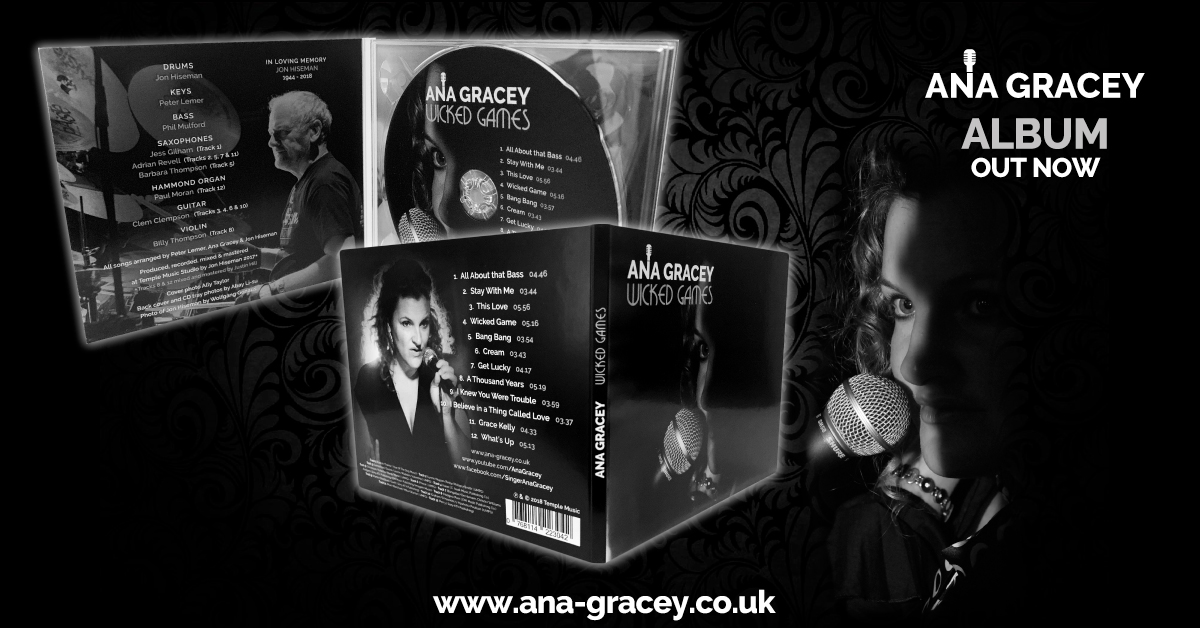 Jazz meets pop rock in a splendid big band treatment with Ana’s mother, Barbara Thompson, joining in the riffing saxes, bluesy piano and nifty bass from Phil Mulford, all pushed along with ever alert drumming. Clever production ensures Ana is given perfect vocal back up – by Ana herself. Bang Bang is from Jessie J.’s third album Sweet Talker (2014) and on Ariana Grande’s My Everything. The hit single featured Jessie J. Ariana Grande and Nicki Minaj – just so you know.

Many will remember that Cream was a hit for Prince and the New Power Generation, culled from his album Diamonds And Pearls (1991). It starts with Mulford’s string bass and Jon’s hi-hat picking up the tempo. Clem then carefully places bluesy notes at just the right moments. Ana floats into a lightly grooving performance that makes this song an album highlight.

Bass and drums set up Get Lucky a Daft Punk composition with Adrian Revell on soprano sax and Peter Lemer’s piano supporting Ana’s scat singing that reaches new heights of soprano-phonic ecstasy. A hauntingly atmospheric concept, it is matched by the beautiful A Thousand Years, a Christina Perry song in waltz time.

‘Darling, don’t be afraid. I have loved you for a thousand years…’ intones Ana with gentle reverence. Billy Thompson’s violin provides a sweetly caressing solace that floats above Jon’s ever present brushes along with Peter’s superb piano treatment.

I Knew You Were Trouble sounds a warning note as Ana recalls the Taylor Swift ditty with a cry of ‘Once upon a time – a few mistakes ago – I was in your sights.’ The trio of Lemer, Mulford and Hiseman set up a jaunty beat that develops into a smoky jazz club vibe, Jon’s sensitive drumming never sounding more appropriate. Peter’s piano work here is a perfect example of how to balance strength with understanding. Indeed, all the musicians play with a calm authority perfectly displayed on I Believe In A Thing Called Love.

I wanna kiss you every hour of the day sings Ana on a tasteful version of the heavy rock tune by The Darkness from their 2003 opus Permission To Land. Super guitar from Clem Clempson is a joy, as is Ana’s sweetly floating vocal, extolling the virtues of unfettered oscular stimulation.

Even more intriguing is Ana’s interpretation of Grace Kelly, the sultry song by Lebanese born artist MIKA that caused quite a stir when it was taken from his ground breaking 2007 album Life In Cartoon Motion and became a chart topping hit single. “I tried to be like Grace Kelly but all her looks were too sad – so I tried a little Freddie, and I’ve gone identity mad…’ Well you can see that would be a problem, Ana solves it with a careful stroll through the MIKA mind game, examining all the options in another brilliant matching of jazz with the genre known as POP.

The grand finale comes with a rousing What’s Up. A Number One hit in in 1993 for the U.S. rock band 4 Non Blondes, it was first heard on their 1992 album Bigger, Better, Faster, More! Ana confesses: “So I cry sometimes when I’m lying in bed…and finishes on the philosophical note ‘25 years and my life is still trying to get up that great big hill of hope…for a destination.’

Wicked Games is the peak of that hill as a destination safely reached and an ambition happily fulfilled. It’s an album of emotional games you’ll really want to play.

Stay up to date with Ana’s music via her website www.ana-gracey.co.uk